Mathira MP Rigathi Gachagua is touted as one of the front runners to become Deputy President William Ruto's running mate in the August polls, despite announcing in March that he would defend his seat under UDA ticket.

Unknown to many, Gachagua studied Political Science at the Marine Corps University and a Bachelor of Arts Degree and Literature from the University of Nairobi.

He is a former District Officer in Ngarua division in Laikipia and Kakamega having served during the Moi era before he left to work for his brother, the late Nderitu Gachagua, who was a governor for Nyeri County.

He started as an assistant secretary in the Ministry of Home Affairs and National Heritage in 1989, before being promoted to become a District Officer.

In March, Gachagua shifted from the Jubilee Party to join Deputy President William Ruto's United Democratic Alliance (UDA), which is in the Kenya kwanza Alliance.

"I have officially left my former party Jubilee and joined the Party of the future UDA. I have paid the official fee to defend the Mathira Parliamentary seat on a UDA ticket. I invite all those who wish to unseat me to join UDA before tomorrow's deadline and face me in the party nominations as they have no chance of beating me in the elections then they are using any party associated with Azimio," he said.

Gachagua has been at the forefront insisting that DP Ruto's running mate in the August elections must come from Mt Kenya region.

Among the candidates who come from Mt Kenya include Waiguru, Kindiki and Muturi.

Notably, Gachagua served as the Personal Assistant for President Uhuru Kenyatta between 2001 and 2006, when the latter was the Minister for Local Governments.

He is listed as a director for Ridor Group of Companies. 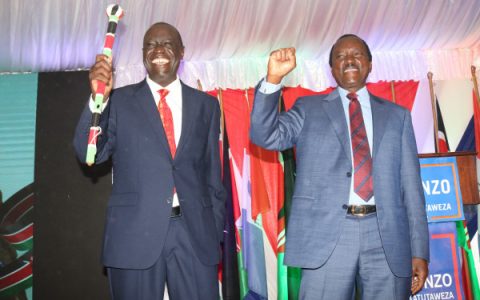