At a hotel conference room, a group of 24 lawyers and prosecutors from Kenya and Tanzania are on Zoom call.

They are focused on arguing their cases as they would in court, examining and cross examining witnesses and making closing arguments.  They showcase their prowess and everything they have been taught in the past three years.

Their case: wildlife trafficking, under the Wildlife Crime (WICRI) Mock Trial Competition programme, a two-year, US Department of State-funded project run by Lawyers Without Borders, which was founded by Christina Storm, a trial lawyer and expert in wildlife crime, anti-trafficking and counter terrorism 20 years ago,

First, it develops tools and curricula individually tailored to each country to build capacity and integrity in the world’s justice sectors.

It also enhances the capacity for collaboration and coordination cross-departmentally in investigations and prosecutions.

“The network of experts of lawyers, judges that have worked with the young lawyers on developing their trial analytical skills, their ability to develop news evidence and to present them to court, public speaking and also to present their case,” says Robyn Taylor, the executive director of Lawyers Without Borders.

Having spent a greater part of her career in wildlife crime, Robyn understands how challenging such cases are when it comes to finding the right evidence and presenting it to the jury.

In Kenya and all over the world, prosecutors struggle to get evidence needed to prove to the court, as they are hard to detect due to location of crime which might be in the bush or forest.

In worse scenarios, in some countries, the crime is being enabled by the government.

For Carolyn Nyambura, a prosecutor in the Office of the Director of Public Prosecution (ODPP), going through the programme for the past two years has made her confident that with skills she has acquired, she will make a difference in her profession.

Before this, they have been under vigorous training called scrimmage rounds in the legal jargon with appointed coaches who are attorneys from mainly US.

“We’ve done numerous training on different aspects of the law from basic trial advocacy, to organised crime, tax, financial investigation as well as wildlife trafficking which was the heart of it,” she says.

“When we began, our trainers used to ask us a lot of examining questions to give us confidence and to be well vast with court matters.

At first it didn’t make sense why they were doing this but later on I realized that the more I was cross examined, the better I became in it,” she explains.

Statistics from the ODPP indicate the conviction rate for wildlife crimes in Kenya has risen from 44 per cent in 2013 to 91 per cent today, signaling a significant achievement in the war against poaching.

“When I was working in Kenya in 2011, there was a small number of wildlife prosecutors, each having a number of cases to work on. Prioritisation was also a challenge.

For instance, an ivory case might be out in the same level as a porcupine court case because the cases were not priorities.

However, the country has currently created units and out more prosecutors to work the cases and have prioritised them to more complex,” says Robyn.

She adds that more resources have been allocated in combating wildlife crime in line with Vision 2030 which has placed emphasis on tourism and preservation of wildlife.

“We have worked with the Kenyan government for the past 10 years and with the ODPP to set up a prosecution training institute in Loresho, in a four years’ project that ended this year,” explains Robyn

The organisation does not represent people in court but give support in expertise, and works with lawyers, magistrates, police, prosecutors, judges, public defenders, immigration as well as in customs.

“It is skill based advocacy that makes lawyers learn by doing more than theory. We have so far have trained close to 600 advocates in Kenya,” says Robyn.

While the Covid-19 pandemic posed a challenge to its activities, technology made it easier for work to continue.

Traveling from one country to another to empower as well as partner with the lawyers has also been challenging due to the pandemic but with the little resources they endeavor to create better systems in more countries. 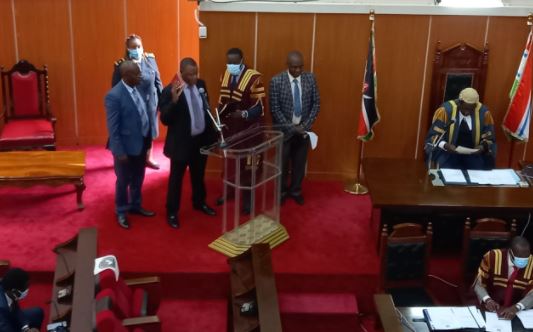