Today, the broadcast space may be a tussle for audience attention between the mainstream and digital. Jackson Onyango looks at how the Internet is re-shaping the business in relation to art.

In the words of US-based Kenyan entertainer DJ Fully Focus, “The year 2020 has shown it’s time to question and challenge a lot of ideas we have accepted as ‘normal’ or ‘just the way it is’.

Because those ideas were created by human beings who lived in a very different time and had very different interests than we do today. Let the evolving continue.”

The information and entertainment squabble for audience between traditional and electronic media has peaked in Kenya.

The phrase, ‘content is king’, has become too common, as emphasised in a study by Oberlo 2020.

Out of the 7.8 global population, the Internet has 4.54 billion users, of which 3.72 billion are active social media users.

On average, according to the study findings, there are around 7.6 social media accounts, and on average, users spend 142 minutes daily on them.

The market is ready, but who will reign victorious in the attention spar?

The so-called mainstream media is presently feeling self-taught and audacious content creators who are using passion and the ‘School of YouTube’ to take a stab on the media sphere.

In essence, this is not a competition, but simply an evolution: a reality, that despite fake news charades and lack of verification from many information-disseminating quarters, the acceptance that digital media is here to stay should be embraced.

In fact, it has become so powerful and with every person owning right to information, the government in Kenya is attempting to intercede and add a Value Added Tax to content streamed online.

Digital stalwart Richard Njau, founder of online show Cleaning The Airwaves (CTA), has been preaching about the #MentalDigitalShift via his social media platforms for a bunch of years now.

His CTA sessions is one of the most outstanding virtual platforms offering entertainment information during Covid-19 lockdown.

“The word professional means someone who has studied, gone to school, gotten the papers and so on. But all this means absolutely nothing to the end user—the consumer.

All the consumer cares about is the content. Did I get from the content what I wanted to get? That’s it.

If a consumer is looking to be entertained, it doesn’t matter how amazing the video shoot was in terms of quality, it’s down to the content,” he tells Spice.

The moment Covid-19 pandemic checked in, the guidelines imposed were ready to shape the media industry in a way not many would have projected.

The fickleness of private broadcast media companies has been exposed, with companies that have decades-rich histories, such as Cosmopolitan Magazine in South Africa, forced to shut down.

“The unexpected and devastating impact of Covid-19, causing the closure of printing and distribution channels, the global halt on advertising spend as well as the inability to host events for the foreseeable future, have made it inevitable to continue trading,” read a statement by the company.

Not only is this a local or African liability, abroad The Mail, Guardian and Vibe Magazine are some of the big media houses that have appealed for public support as they struggle to continue their print and online publications.

The lack of advertising fees is having a huge impact on mainstream media houses as they gasp for air.

In turn, this has led to online content creators and influencers being given leeway to capitalise on the shortcoming, and boost their ratings.

Advertisers are now gifting this community a healthy chunk of their marketing money to up their sales in the virtual world.

Inevitably, ‘conventional journalists’ have been forced to adapt to Covid-19 safety measures, further pushing the uncompromising shift to the digital space.

“If you were not required at the office, you are not an essential worker,” users  all over social media bantered when companies and even the government required part of their workforce to work remotely.

It is, therefore, not surprising that many popular media personalities have since shifted to the cyberspace, a majority of whom have since launched their own YouTube channels.

Former member of the rap duo Gidi Gidi Maji Maji, Joseph Ogidi aka Gidi—now a radio presenter—has been doing exactly what the traditional radio ought to do on his now popular podcast SemaNaGidi.

Former Milele FM presenter Felix Odiwour aka Jalang’o has been doing the same on his YouTube and other social media platforms in sessions dubbed Bonga Na Jalas.

He alludes that more Kenyans are going online as first source of information and entertainment content, with the traditional media becoming the second source or just for confirmation of news items.

“So the competition is more on first source of media content, and therefore, mainstream media must transform to fit in the new normal.

I was inspired to launch my own digital platforms by the changing media environment and the need for innovation within the industry.

Most radio stations are still operating with the traditional format, which has been overtaken by times.

A majority of listeners want more than just hearing your voice. They want sharable content such as a podcast they can listen to on demand on their portable devices,” he tells Spice.

Gidi has also launched a mobile application called ‘GidiGidi’ that has all his podcasts, news updates, live streaming shows plus a dating segment where users can chat and find soulmates.

He says: “It’s an innovative app that combines entertainment and info dissemination while fitting in the lifestyle of the target market. Radio presenters and other media personalities must innovate to help fit in the new media environment.

Mainstream media must also change the culture and business models to fit in the new reality, because digital content is taking over,” he insists.

In America, popular podcaster Joe Rogan was paid a hefty US$100 million (Sh10 billion) by audio streaming company Spotify to transfer his immensely subscribed-to podcast that covers everyday topics for about just over an hour.

Others such as Joe Budden are but some of those whose broadcasting rights have also been acquired by the same company for an undisclosed fee.

He did however reveal he turned down a US$10 million (Sh1 billion) deal.

“I’m glad digital is getting the proper attention. This is a realisation that the Internet was made to help more than destroy.

She adds: “Going digital means we are observing social distancing, but does not mean we are cut out from doing our job.

Our technicians from the studio just have to come up with means to make it work, and deliver a quality broadcast for our target audience.”

Digital broadcast presenter Cherie Cherustui says, “We just had to relocate the timings for shows that required us to be in the office or studio at some specific time to give our audience time and space to adapt at the comfort of their homes.

But we are settling into the new ways to accommodate our audience,” she says.

Cherie adds that the media has since realised it had a higher calling than just be there to relay any other information to the masses.

“I feel like economically, the broadcast media has been affected by the Covid-19, but professionally the reality has rallied all broadcast entities to be more active as the prime source of information.

At first, when the coronavirus hit home, it felt odd even a little more like a routine to just wake up, announce the numbers and still remind people to wear masks.

But now, I feel like it is a responsibility; a gift even to be able to speak to my fans every morning,” she says.

Njau expounds it’s about packaging the vision for the end user in a way the consumer emotionally connects with them best.

“It’s always been about packaging your vision into something that an audience can consume and giving it to them.

Putting content into audio, written or video format for an audience,” says Njau, adding that the direct contact between creator and consumers, powered by the Internet, is the ultimate game-changer. 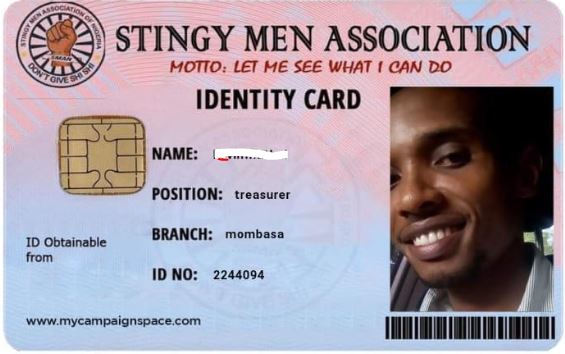 What you should know about Stingy Men Association(SMA)

Mercy Mwende talks her experiences, triumphs as a stylist