When Dennise Ngele allowed her two children to go on a family vacation in Naivasha with their aunt in 2015, she had no idea what fate would bring to her door.

Her 14-year-old daughter was the only one who came back home to her. What was supposed to be a fun-filled gateway led to the death of her four-year-old, who drowned in a pool at Olkaria Spa.

“They had gone to Hell’s Gate and later the spa for a snack. This is where the freak accident happened.

There were so many people in the pool area, somehow my son wandered off unnoticed; it was my daughter who realised he was missing.

They immediately searched around for him and he was found in the pool, full of people and his pulse faint,” she recalls.

Ngele says they tried to resuscitate him then rushed him to the hospital, but he did not make it.

That particular day, she was in church and she remembers both hers and her husband’s phones were in silent mode.

Her sister-in-law, who was in charge of the children, had called to inform them about the accident multiple times, but they were not reachable.

“I remember seeing my husband walking around helplessly and I knew something was wrong and that’s when the pastor announced about my son’s death. I was devastated, I could not believe it.

We rushed out of the church and went straight to Naivasha where we were informed our son was in the morgue,” she says.

At the morgue, Ngele was still perturbed by the event that led to her son’s death.

“I could not believe the young boy lying there was my baby. I inspected his cold body and there were injuries, I couldn’t imagine the pain he experienced in that accident,” she says.

There were more than dozens of adults just a few feet away from the pool, but no one noticed, even the lifeguard — and this is surprisingly common.

Questions of how a four-year-old wandered unsupervised and got into a crowded pool still lingers.

She stresses the importance of being fully attentive when watching children in and around water.

“If you are doing something else, you’re not 100 per cent focused, and you’re unable to effectively notice if something happens.

That same day, there was another case of a boy who almost drowned, but was rescued by his father.

There were two lifesavers on duty, Where were they when this boy was drowning?

What were they doing while my son was fighting for his life?” asks Ngele.

“If you see a child go into the pool unattended, stop them. It won’t cost you anything. As a parent or a guardian, be on the lookout even if that’s not your child,” she advises

The World Health Organisation  (WHO) defines drowning as the process of experiencing respiratory impairment from submersion or immersion in liquid; outcomes are classified as death, morbidity, and no morbidity.

The health agency says drowning is the third leading cause of unintentional injury death worldwide, accounting for seven per cent of all injury-related deaths.

Children’s vulnerability changes with age. According to the WHO notes children under 12 months are relatively immobile and entirely dependent on caregivers.

They can drown quickly and in very little water such as water in a bucket at home that may not be perceived as risk.

Children who are mobile, but too young to recognise danger or to get out of water are at risk, especially in the absence of barriers and capable supervision.

Sammy Thianga of Lifesaving Africa Rescuers notes that drowning is a serious and neglected public health threat claiming the lives of 372,000 people worldwide and an average of over 2,000 people in Kenya annually.

While more than half of these cases are children aged between four and 12 years, he says, the figures could be higher since most cases are never reported.

“Despite drowning being a well-known leading killer, there is no broad prevention effort targeting it.

This is due to lack of data, which makes it a public health challenge.

Alarmingly, drowning is among the 10 leading causes of death of children and young people in every region of the world, with children aged under five years disproportionately at risk,” he explains.

Thianga adds that one of the best and efficient ways of eliminating drowning in the country is teaching children how to swim.

Arming children with life-saving skills can have a long-life immunisation-like effect against drowning.

“Survival swimming is a life skill that every child should have. It generally involves learning the minimum skills needed to survive an unexpected fall into deep water.

However, drowning is surrounded by myths and misinformation that makes it difficult for people to make informed decisions.

People and especially children must know what drowning might look like and to call the closest adult for help if they see it.

Since children can have a hard time formulating words, especially when scared or upset, it’s important to have a designated word that they can repeat  such as  ‘help’, ‘hurt’ or ‘danger’.

They should also be trained to point in the direction of a child in trouble to channel their panic quickly and effectively.

Many people may be used to the waving arms and cries for help when a character is drowning in the movies. However, Thianga says it’s generally far more silent and subtle, hence it is easy to miss

“Some signs that indicate drowning include head tilted back with mouth open, eyes glassy and empty, unable to focus, hyperventilating or gasping, trying to swim in a particular direction but not making headway and uncontrollable movement of arms and legs, rarely out of the water,” he explains.

The risk of drowning is anywhere there is water: buckets, bathtubs, water storage, ponds, and pools.

Prevention is better than rescue

“Where there is water, there is the threat of drowning. Open wells, uncovered manholes and ditches pose a risk.

There should always be barriers controlling children’s exposure to these risks.

Barriers like fencing the pool or covering wells and water storage like water tanks should not replace the attention of a capable supervising adult,” he says.

Drowning prevention is vital since once someone starts to drown the outcome is often fatal.

Unlike other injuries, survival is determined almost exclusively at the scene of the incident and depends on how quickly the person is removed from the water, and how swiftly proper resuscitation is performed.

“Prevention rather than rescue or resuscitation is the most important method by which to reduce the number of children drowning.

CPR – both chest compression and mouth-to-mouth resuscitation – is the only way to prevent death when a drowning victim has no pulse and is not breathing.

Survival improves when appropriate resuscitation is performed as soon as submersion is over,” he advises.

Despite losing her son, Ngele allows her daughter to swim. She believes if her son had swimming skills he would have floated enough for someone to notice him and he would have survived.

“It’s imperative to educate young children on the dangers of not just pools, but other water bodies like dams, wells and even water tanks, and what to do if another child is in trouble.

Children are pliable and they learn fast. After our son’s accident, we ensured our daughter knows how to swim.

Also service providers should ensure they hire guards that are sensitive and grounded enough.

Having two guards on-site and a child drowns does not make sense at all,” she explains. 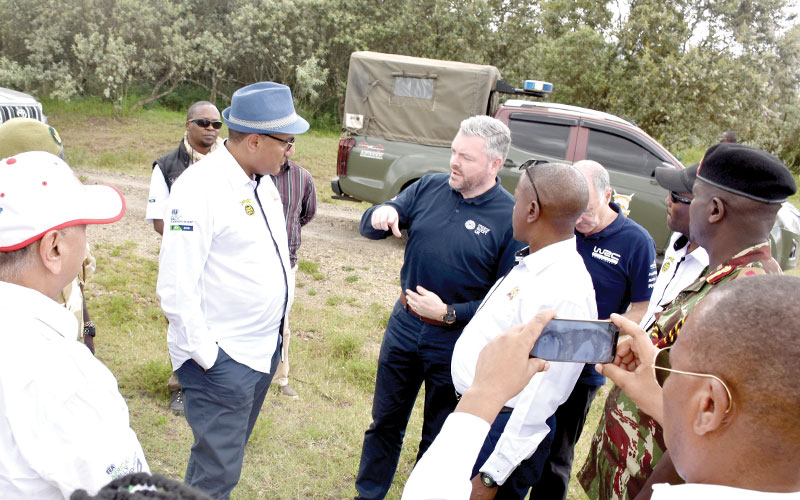 Use of Hell’s Gate during WRC has minimal effect on wildlife, eco-system

Ten foods to avoid while breastfeeding

I donated a third of my liver to my son