All is set for former Rift Valley Regional Commissioner George Natembeya's homecoming party which is scheduled for Saturday, January 29 at Kenyatta stadium in Kitale.

Natembeya resigned in mid-January to focus on the Trans Nzoia gubernatorial race in the August 9 election, a resignation that elicited mixed reactions from residents of the vast cosmopolitan county.

Speaking to People Daily Digital, Silas Wafula one of Natembeya's supporters, said his homecoming will set the stage for a serious political duel in Trans Nzoia County.

"Our competitor Chris Wamalwa has been crisscrossing the whole of Trans Nzoia from 2017 as a lone ranger, now he should prepare for a humiliating defeat after Natembeya's homecoming on Saturday," Barasa said.

Wafula said a majority of Trans Nzoia residents believe the former administrator will fix all the challenges that were not addressed by the outgoing Governor Patrick Khaemba after completing his constitutional bound two terms.

"Based on our assessment, electorates here are very hopeful that Natembeya will bring a lasting solution to lack of title deeds, complete the stalled Trans Nzoia County Teaching and Referral Hospital, Kenyatta Stadium, Kitale business park and renovate all the roads in Kitale town that currently have potholes" Wafula added.

James Wainaina a taxi driver in Kitale town said Natembeya who has 26 years of experience in provincial administration will transform Trans Nzoia's economy by addressing the challenges affecting maize farmers, equipping youths with technical skills and creating a conducive environment for investors.

"Former RC has a wide network, he enjoys a good working relationship with agriculture CS Peter Munya which is a plus to us. With his huge experience, we know for certain that our economy will grow tremendously" Wainaina stated.

However, there are other people in Trans Nzoia who hold a contrary opinion that he (Natembeya) has nothing to offer the electorates.

Philemon Simotwo said Natembeya has an ambitious agenda for the people of Trans Nzoia but he may not deliver because of the people surrounding him.

"Yes we admit that Natembeya has a clear vision for us but that vision can be killed by the people who surround him the likes of Defence CS Eugene Wamalwa and others who call shots, they have created a wall making it hard for hustlers to access him," Simotwo said.

In an interview with Citizen TV, Natembeya said if he ascends to power as the second Governor of Trans Nzoia, he will ensure all the government officials perform their duties and responsibilities as expected.

"I have said all the government officials working in the county government of Trans Nzoia must prepare to work and work hard because mimi sitabembeleza punda kwa mteremko. The moment you accept that you must deliver, even an office messenger will recognize my presence," he warned.

He also said he will give priority to issuing title deeds, ensuring that all mothers deliver safely in hospitals and that the County Referral Hospital under construction is completed, equipped and operationalized.

"We shall ensure that the more than 70 per cent of the people of Trans Nzoia who don't have title deeds get them, that our mothers don't deliver in maize plantations and that we shall have specialized services in our County Referral Hospital," he said.

Natembeya will be facing off with Kiminini Member of Parliament Chris Wamalwa, ICT and Infrastructure advisor in the office of the Deputy President Kakai Bisau, Legal Advisor in the same office Dr. Abraham Sing'oei, security expert Philemon Samoei, teachers Julia Kichwen, Teresa Metto and Dorcas Njenga who is a businessperson. 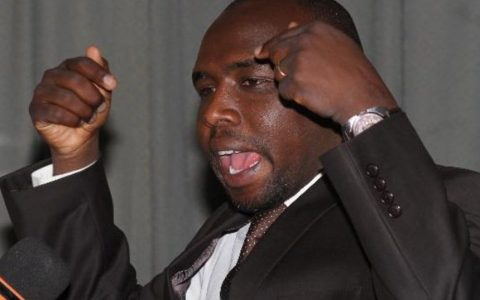 I once knelt for Natembeya in his office – Murkomen

Boda boda riders will be part of my government – Natembeya