FORD-Kenya party in Trans Nzoia County has distanced itself from Governor Patrick Khaemba's poor performance in the devolved unit.

While addressing media in Bidii area, the County party chairperson who is also Kwanza constituency member of Parliament, Ferdinand Wanyonyi, said that FORD-Kenya should not be blamed for Khaemba's incompetencies.

"The people of Trans Nzoia elected Governor Patrick Khaemba for two terms through our party. It should be noted that FORD Kenya was not elected into office and whoever wants to think FORD Kenya has failed should rethink his/her position," Wanyonyi said.

The second-term lawmaker said Khaemba should carry his own cross and asked the electorates to carefully vet all aspirants who want to succeed Khaemba as the second governor of the cosmopolitan county.

"The people of this county voted for my brother Patrick based on his experience as a director in the African Development Bank as well as a permanent secretary in the ministry of health. As we head to the August 9 elections, I am asking our people to assess all the gubernatorial aspirants before casting their votes," he added.

Khaemba's administration has been accused of incompetence and misappropriation of resources. His flagship projects including Trans Nzoia County Teaching and Referral Hospital, Kenyatta stadium, and Kitale business park are yet to be finished.

Wanyonyi expressed optimism that FORD Kenya will defeat other parties in all elective posts in Trans Nzoia County and told other parties to prepare for a serious political battle.

"We are told that there is another political party headed by our brothers who defected from our party. That party is a toddler because FORD Kenya is the second oldest party in this country. I can assure you that party will not get any seats in Trans Nzoia, this is the lion party zone," he added.

He further called on the National Cohesion and Integration Commission NCIC, to reign on politicians spreading politics of incitement, hatred and ethnic profiling.

"NCIC should be more active especially as go for the elections. Kenya needs peace and whoever will try to disturb it should be dealt with ruthlessly" he added. 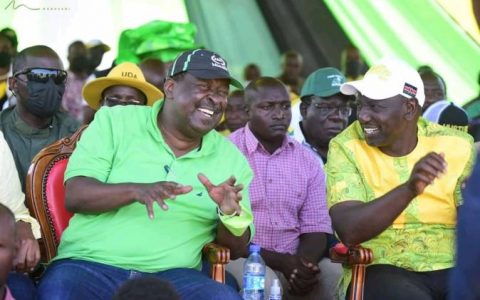 No deal yet on Kenya Kwanza posts – Mudavadi

Why aspirants eyeing UDA ticket in Bungoma aren’t at ease