One Kenya Alliance (OKA) co-principal Moses Wetangula has announced that the coalition will announce its flag bearer in January ahead of the 2022 polls.

The Ford Kenya party leader urged Kenyans to desist from propaganda that he says is orchestrated by their critics who term them as undecided.

Wetangula who was addressing a press conference said selecting a presidential candidate needs sobriety and involves a lot of deliberations with no hurry.

“We want to urge Kenyans to forget about the naysayers who think that OKA is moving slowly, good coalitions and good preparations for elections are never hurried. We have promised Kenyans that by the end of January we shall be unveiling our OKA candidate,” he said.

Wetangula further revealed that Ford Kenya is set to unveil an election board that will be tasked with overseeing the party’s electoral processes come next year.

"We are done with the party’s National Delegates Conference (NDC). We expelled enemies, and we are now ready to go," he said.

The Bungoma Senator also urged President Uhuru Kenyatta to address the ongoing dispute between Kenya and neighbouring Uganda that has seen the two nations issue trade sanctions on each other.

“We want to urge the country and the government to quickly move and resolve the small issues we see popping up between Uganda and Kenya in trade terms. Uganda is our number one trade partner, and we benefit immensely from each other from this trade,” Wetangula said. 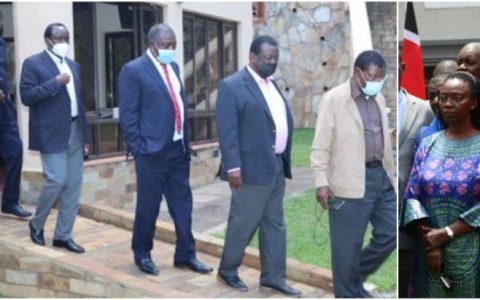