Kirinyaga Governor has said one must be careful to stay relevant in Kenyan politics and listen to the people before making a political move.

Waiguru said this as she confirmed joining Ruto's United Democratic Party (UDA) on Tuesday morning following a meeting with the DP at his official residence in Karen.

The Governor, who is seeking to defend her seat in 2022, was welcomed to the 'hustler movement' after ditching President Uhuru Kenyatta’s Jubilee party.

“After extensive consultation with the Kirinyaga people, I have listened and officially decamped to the hustler nation,” Waiguru said.

Waiguru will now defend her gubernatorial seat come 2022 on the UDA party ticket and in a bid to continue serving her Kirinyaga people.

"This is the party she will use to defend her seat because everyone on the ground told her they wanted to be associated with Ruto," a source told People Daily Digital.

She was accompanied by members of the Kirinyaga county assembly led by the Majority Leader James Murango, Speaker Anthony Gathumbi and Deputy Speaker Joel Wagura.

“Thank you for accompanying me on my journey to join the Hustler Nation. As a team, we will walk United to achieve development and growth for our people through the bottom up economic model,” Waiguru said. 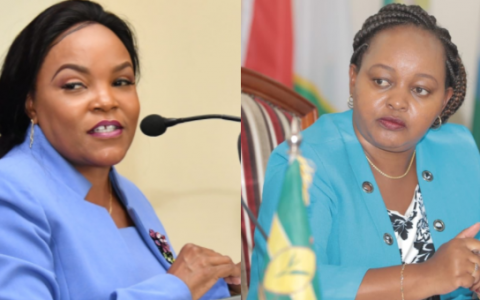