to’s tour of parts of Nairobi’s Eastlands yesterday after rowdy youth tried to disrupt his meeting by throwing stones.

Ruto started his tour by attending two church services at PCEA Pipeline, Embakasi South and the Redeemed in Kware Ward, in the same constituency.

Trouble started as the DP’s motorcade made its way to Jacaranda Grounds, in Embakasi East with rowdy youths trying to block the road and engage in stone-throwing, claiming they were not involved in planning the meeting.

Police were forced to lob teargas canisters at the protesters to disperse them and clear the way for the DP’s team to make its way to the rally venue.
Addressing the meeting, Ruto appeared to blame the incident on ODM leader Raila Odinga, challenging him to assure Kenyans he will accept election results if he loses the August elections.

He asked Raila not to mobilise his supporters to cause violence during the campaign period and after the election if he loses.
Practical solutions

“The only thing I ask my friend Raila Odinga, is to accept defeat and should not cause violence or swear himself in after the August 9, General Election,” said Ruto.

The Deputy President said leaders and supporters of the Hustler Movement will not succumb to threats, blackmail and intimidation employed by their detractors to manage the country’s politics.

“You have been threatening us for the last four years. Those threats have amounted to nothing,” said Ruto.

He urged his competitors to stop duping youth with handouts, saying it was an insult to the millions of educated and hardworking youth seeking jobs among other opportunities.

He also challenged Raila to come up with practical solutions to unemployment and poverty in the country.   “Please, respect the youth of Kenya. These are not people to be given handouts. They want jobs and business opportunities.”

Once in office, Ruto said he will implement projects and programmes that will create jobs and opportunities for the youth.

The lawmakers asked Raila to denounce violence and embrace peace ahead of the August General Election.

Ichung’wah claimed Raila was the biggest impediment to the peace and unity of the country.  He urged the former Prime Minister to stop using violence to scare his opponents out of his perceived strongholds.

Garissa Town MP Duale also blamed Raila for the chaos that had rocked the meeting and challenged him to manage his supporters to stop using violence to advance his presidential bid.

“If you think you can win an election using violence, you are misplaced,” said Duale.

Kiarie urged those who have not registered as voters to do so and vote for the Hustler Movement to ascend to power and address challenges facing them.

Deputy President assured Nairobi residents that under his administration there will be no demolitions without compensation.  “Before anyone is moved, there must be a place for resettlement,” said Dr Ruto.

He also pledged to address the perennial water shortages and sewage systems in some parts of Nairobi.

In a rejoinder, Raila’s communication aide Dennis Onyango dismissed Ruto’s allegations, saying he is to blame for the protests, as he either failed to pay the youth or those who were to pay them did not.

“It is not beyond Ruto to sponsor the disruption of his own rally. It also ought to be understood that the youths were being paid to attend the Jacaranda rally today. Either Ruto ran out of money or the people he trusted with the money did not pay all the youths,” said Onyango. 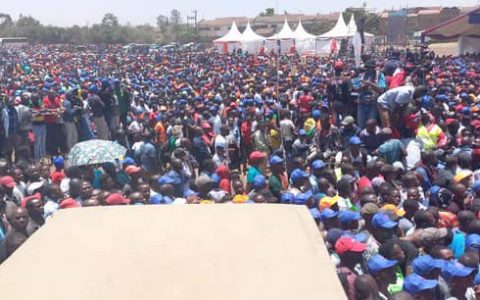 Jacaranda grounds packed to capacity ahead of Azimio rally