Wambui, who is Deputy President William Ruto's point lady in the vast constituency, maintained that Thika is a cosmopolitan town and every presidential hopeful is welcome to sell their agenda to the electorate.

Addressing journalists in Thika town, Wambui said that Kenya has matured politically and that every leader, irrespective of their political affiliation should be allowed to campaign without fear of being intimidated.

The former MP maintained that police should be quick to arrest and prosecute anyone found disrupting Odinga's rally. She added that she stands for peace and beseeched everyone attending the major event to uphold the same.

"Everyone attending the event should be peaceful and should endeavour to preach the same. We want everyone in our politically matured country to be given a platform to campaign in any part of the region without fear," she said.

She revealed that she had reached out to police and administration officials at the county level to put the house in order by conducting surveillance in the constituency to ensure that the meeting ends with zero forms of violence.

Odinga is set to hold a mother of all rallies in the busy town which has been mentioned as his political head start as he seeks to endear himself to voters in the vote-rich region.

Earlier spot check by People Daily Digital revealed that all is set for the event that will starting at 10:00 am. 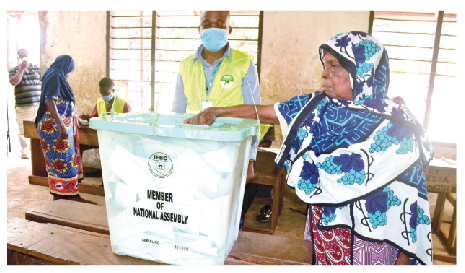