Deputy President William Ruto is under pressure to pick a running mate from Mt Kenya East against a backdrop of claims the region has been overlooked for long in national politics.

The region entails Embu, Meru and Tharaka Nithi counties that are considered significant in the larger Mt Kenya region political calculations but have never produced a president or their principal assistant since independence.

It is for this reason that the region has frequently been mentioned in the search for a running-mate for leading candidates Ruto and Azimio-One Kenya Alliance’s Raila Odinga.

National Assembly Speaker Justin Muturi, Tharaka Nithi Senator Kithure Kindiki and Agriculture Cabinet Secretary Peter Munya are some of the names from the region that have been floated for the position.

Munya, who is a senior member of Azimio, has lately been pushed to the periphery in Raila’s camp, leaving Muturi and Kindiki to carry the region’s hopes in Ruto’s Kenya Kwanza Coalition.

He was received by Ruto’s lieutenants during a thanksgiving event at Kapsabet Showground hosted by Governor Stephen Sang who recently won the UDA ticket to defend his seat.

“I consulted with many people and they told me the winning formula is in Kenya Kwanza. We sat with the DP, Musalia and Wetangula and agreed to work together. What we want is the service to the people of this country,” Muturi said.

The Speaker’s decision to join Kenya Kwanza has, however, met resistance in his Democratic Party.

Embu Governor Martin Wambora has also joined the alliance although he is not yet being considered a candidate for running mate position.

He has, however, declared support for Ruto’s alliance saying his Umoja Maendeleo Party will fully campaign for him

His entry into the alliance raises Mt Kenya East’s stake in the quest for the deputy president’s position.

“I have instructed all members of the party to ensure Ruto’s picture appears in their campaign posters,” said Wambora who is running for the Embu senate seat.

Munya’s profile had earlier this year risen within Azimio and when he was prevailed upon not to resign from his ministerial position in February to try to recapture the governor seat that he lost to Kiraitu Murungi in 2017, it was thought his path to the running mate slot was clearer.

Dynamics have since changed and a recent confidential report prepared by a top Azimio team placed him a distant fourth in the search for Raila’s partner.

Those ahead of him were party leaders Martha Karua (Narc Kenya), Kalonzo Musyoka (Wiper) and Mombasa Governor Hassan Joho.

Kindiki stormed the political scene in 2013 and netted a lucrative post in Parliament despite being a political newbie.

Having not served in any elective position before, it was fairly unexpected that Kindiki, a professor in international law, would become the Senate Majority Leader.

This was one of the big posts created in the newly instituted House and Kindiki became its first beneficiary.

The position made him a central figure in the implementation of Jubilee programmes in the alliance’s first term.

Together with Aden Duale, who occupied a similar position in the National Assembly, they were tasked with ensuring the government’s agenda passed in both Houses.

Between 2013 and 2017, the Senator was a powerful figure whose influence was felt in and out of the House. He drove government business, lobbied for votes for key Bills and ensured members affiliated to the coalition that brought together TNA and URP parties, and other outfits like Kanu, toed the line.

After the 2017 elections, he was picked for Senate deputy Speaker post, a less influential position.

He was to join the list of top Ruto allies who were ousted from lucrative positions in Parliament after the DP fell out with the President.

Despite the loss, he stuck with Ruto boosting his chances in the search for the DP’s running mate.

Analysts say Kindiki has the qualities that could make him the country’s second deputy president.

“Kindiki has got the public stature and work ethic that befits that office. Like Martha Karua in Azimio, he does not come with baggage of integrity issues. He has an impeccable record in public service and he is not dogged by graft,” said Franklin Kaburu, a political analyst.

He added that anyone picked for the position has a greater chance of consolidating votes in Mt Kenya East.

“If he is also picked, he is likely to bring a bloc of votes from Mt Kenya East. It is a bygone conclusion that the region will vote for the coalition that will pick a running mate from the area,” added Kaburu who is also the secretary general of Party for Peace and Democracy.

Kaburu said Muturi might not add much value to Ruto’s ticket saying Embu is already a Ruto stronghold and will vote for him whether a running mate is picked from he county or not.

“Outside Rift Valley, Embu is the second stronghold of Ruto. So unless something happens that will significantly change the dynamics, Ruto will get solid votes from the region,” he said.

On Munya, he said he might no longer be a strong contender for Raila’s deputy adding it was a situation he might be willing to live with it.

“My feeling is he is aware he is fading away from the running mate position. He is a loyalist to the President and Raila so he will not run away even if he is not picked. He will remain but he will have a duty to explain to the Meru voters why he has not been picked,” he added.

Political analyst Philip Chebunet said Kindiki could make it as DP adding he was loyal and enjoyed a close relationship with Ruto.

“Kindiki can make it as DP. He is humble, loyal, honest and strong. He is also hardworking,” he said.

The trio is battling with counterparts from Mt Kenya West for the lucrative post. 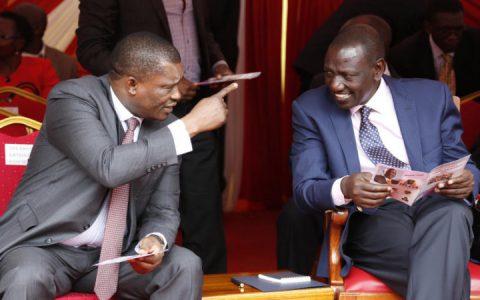 Babu Owino suspended from parliament for 5 days over disorderly conduct