Some 2.5 million Kenyans from 23 counties across the country are struggling with the adverse effects of ongoing drought which has caused low crop production.

Cabinet Secretary for the Public Service, Youth and Gender Affairs Margret Kobia has announced that 13 counties in the Asal communities are the most affected by the prolonged drought which has led to food crisis and malnutrition.

Some of the countries that have been affected by the drought include Lamu, Turkana, Marsabit, Samburu, Isiolo, Wajir, Garissa, Tana River, Kilifi and Taita Taveta.

Speaking while receiving and flagging off the distribution of 340 tonnes of food donated by Kuwait to benefit some 6,400 families affected by the drought, Kobia maintained that the government has put in place measures to confront the recurrent crisis for resilience.

Kobia said that her ministry is planning to initiate various programmes such as irrigation projects through the drilling of boreholes to stop reliance on purely rain-fed agriculture and the establishment of a drought fund.

“The government is doing a lot in terms of irrigation, infrastructure among other areas in a bid to both eradicate poverty,” she said.

The CS further revealed that the government is planning to buy 76,667 livestock from farmers which will be slaughtered for distribution as relief food.

To stimulate the economy in the drought-affected counties, Kobia revealed that the state has shifted from food distribution to cash transfers to help curb pilferage and ensure decency.

While pleading for more food help from Kenyans and willing agencies to support the growing number of needy Kenyans, Kobia upheld that the cash transfer programme will curb corruption often witnessed during the distribution of food and ensure the targeted needy Kenyans benefit.

“Looking at the huge number of persons affected by drought, we must say that the available food is not enough and that is why we are partnering with NGOs, like-minded countries among other agencies to sustain the affected persons as we wait for rains,” she stated. 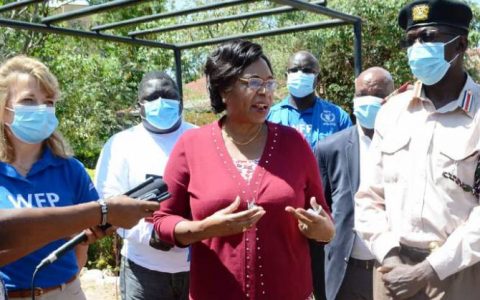 Next government should tackle drought as a priority