About 1,500 people who are HIV positive in Nyandarua county are yet to start taking ARVs, the County government revealed yesterday.

Chief Officer for Health Sarah Ndegwa said 11,000 people in the county are HIV positive but only 9,600 are on ARVs.

“We are asking where are the remaining people? We want all people who have tested positive for the disease to be on (ARV) programme,” she said.
“HIV is no longer a threat to human beings. The stigma and discrimination of those who are positive is no longer there,” she said.

The officer said the county’s success rate stands at 95 per cent adding that it can be moved to a 100 per cent if those yet to start using ARVs can be brought on board.

She was speaking at Chamuka dispensary grounds in Ol Joro Orok sub-county during celebrations to mark World Aids Day.

Ndegwa, who represented Governor Francis Kimemia said the county infection rate is 2.4 per cent compared to the national rate of 4.9 per cent.
She said the county was still facing  teenage pregnancy challenge with 25 girls aged between 10 and 14 years getting pregnant in the county last year. She urged parents to be proactive in protecting their daughters.

She announced the county will open a cancer clinic at JM Memorial hospital next week, so that people can go for testing adding that many people go to hospital when it is too late.

“I urge men to treat the girls as their daughters and sisters and always protect them,” she said.

Several people who are HIV positive who spoke during the ceremony urged the people to go for testing saying the disease is no longer a killer.

Mercy Wanjiru from Ndunyu Njeru in Kinangop said she has lived with the disease for 21 years. She has four children, three of whom are HIV negative.
A teacher, Ann Wambui, who is also HIV positive said cases of defilement were still rampant in the county adding that most culprits go unpunished because most families opt for out of court deals.

Wambui and Wanjiru said women who are HIV positive were still sexually active and urged the society to accept them. 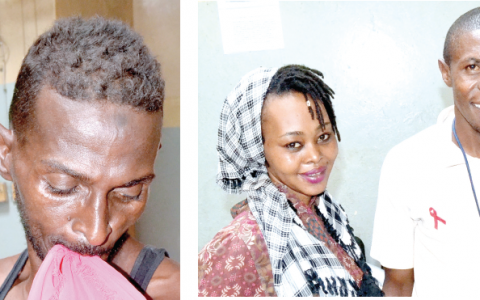