Early first-half goals from Memphis Depay and Luuk de Jong and a late strike from the returning Ansu Fati helped Barcelona snap a three-match winless streak with a 3-0 win over Levante on Sunday afternoon at the Camp Nou.

Poor efforts in their previous two LaLiga Santander contests made Sunday's encounter a pivotal one, and Barcelona responded with a very solid effort, which included a much-anticipated return from Ansu Fati, who scored in the waning minutes to top off a bright day for the Blaugrana.

Suspended head coach Ronald Koeman sent out a starting 11 that had youngsters Nico Gonzalez and Gavi in the mix in midfield, while Eric Garcia returned to his post at centre-back.

Barcelona have suffered in their last several matches in terms of scoring goals, but got an early break when Nemanja Radoja fouled Memphis Depay in the area, which the Dutchman clinically converted to give his side a 1-0 lead.

Levante were making things easy for Barcelona in attack, and Luuk de Jong then opened up his Barcelona account by receiving a pass from Sergino Dest and hammering a right-footed finish past Levante goalkeeper Aitor Fernandez for a 2-0 advantage.

Barcelona were enjoying their football, and Gerard Piqué could have easily made it three had he connected on a cross from Memphis. That was then followed by chances for both Memphis and Gavi.

Good vibes continued into the second half, and the Camp Nou was even more delighted at the hour mark when Riqui Puig was brought on for Philippe Coutinho.

The cheers were even louder in the half when Ansu Fati made his long-awaited return from his meniscus injury in the 80th minute, replacing Luuk de Jong, while Ronald Araujo and Yusuf Demir came on for Oscar Mingueza and Gavi.

Barcelona's triple substitution led to some switching off from their defence and after Jose Luis Morales fired wide for Levante, Marc-Andre ter Stegen had to produce a big save to stop Alex Cantero from scoring and maintain the two-goal advantage.

All that was lacking was a dream return for Ansu Fati, and the 18-year-old promptly delivered with a fierce right-footed strike that wrapped up the three points and made it 3-0. 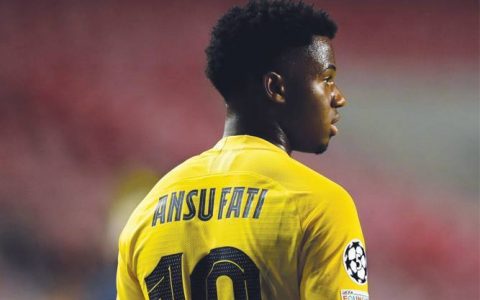