It is not yet clear what caused the explosion in the city's port region. Video posted online showed a large mushroom cloud and destroyed buildings.

Hospitals are said to be overwhelmed by casualties.

The explosion comes at a sensitive time for Lebanon, with an economic crisis reigniting old divisions. Tensions are also high ahead of Friday's verdict in a trial over the killing of ex-Prime Minister Rafik Hariri in 2005.

Lebanese Health Minister Hamad Hasan has spoken of many injuries and extensive damage, and the Lebanese Red Cross says hundreds of people have been taken to hospital.

A BBC journalist at the scene reported dead bodies and severe damage - enough to put the port out of action.

Reuters news agency quotes sources as saying 10 bodies have been pulled from the wreckage.

The cause of the explosion is still not known, but some reports suggest it may have been an accident. Lebanon's National News Agency reported a fire breaking out at what it called an explosives depot at the port before the explosion.

A large building in the port, which is close to the city centre, was blown apart.

'Glass going down from all over the building'

I saw the fire, but I didn't yet know there was going to be an explosion. We went inside. Suddenly I lost my hearing because apparently I was too close. I lost my hearing for a few seconds, I knew something was wrong.

Literally all over Beirut, people were calling each other from different areas kilometres away and they were experiencing the same thing: broken glass, buildings shaking, a loud explosion.

Actually we were shocked because usually when it happens, just one area will experience those happenings after an explosion, but this time it was all of Beirut, even areas outside of Beirut. 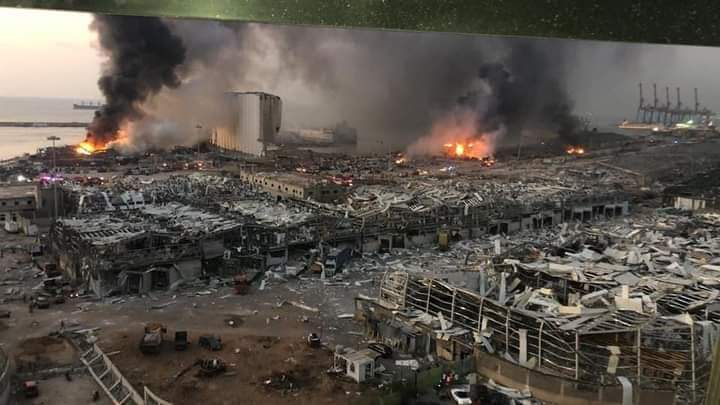