Milimani Senior Principal Magistrate Abdul Zainab rejected Karua's request to assume prosecutorial duties saying she did not show how the DPP failed to discharge his duties.

In her ruling, the magistrate said for a private citizen to be permitted to undertake prosecution he or she must show the DPP failed in his constitutional mandate under Article 157 of the constitution.

"I find the application for private prosecution by Karua lacks merit and it's dismissed in totality," she ruled.

Magistrate Abdul said Karua did not file a formal report with the DCl on the said electoral offences.

In her application to the court, Karua had claimed that voter bribery was live during the Kirinyaga gubernatorial polls in 2017.

She highlighted a few incidences of malpractices that the police failed to act.

"Without a private prosecution, the injustices against the applicant at the Kirinyaga County gubernatorial elections will go unpunished and unredressed, " Karua's lawyer Gitobu Imanyara submitted.

Imanyara had presented evidence pinpointing competitors of his client who had participated in voter bribery at Baricho secondary school, Kangaru and Sagana primary schools among other areas during the elections.

Among those Karua wanted to privately prosecute are, James Muriithi Kangara who was a chief campaigner for Governor Ann Waiguru, Angela Wanjiru Maina and Julius Maingi, who were IEBC presiding officers and Samuel Seki who is the IEBC returning officer Kirinyaga County.

According to court papers, on May 9, 2018, Karua had written to the DPP seeking criminal investigations on the theft or loss of video evidence which would among other things show Muriithi Kangara, being the chief campaigner, bribing voters at Kanguru primary school.

IEBC Lawyer Julius Anyoka and three officials of the electoral body namely; Wanjiru, Maingi and Seki opposed the application saying that the court had no juridictions to hear and determine on the ground that it was not gazetted.

He also told the court that 12 months had elapsed from the date of the commission of the alleged offences and the determination of the election petition at the High Court. 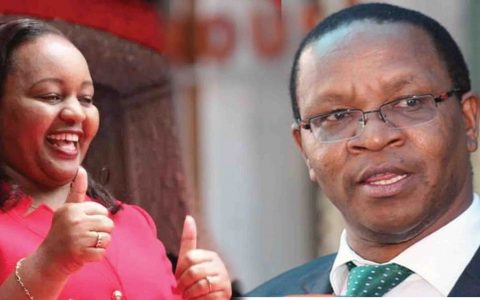 Ngirici officially resigns from Jubilee, to run for Kirinyaga governor as independent candidate