The ongoing surge in Covid-19 infections could jeopardise the second phase of schools reopening.

Responding to queries from Kenyans on his social media account yesterday, Acting Director General  (DG) for Health Patrick Amoth said the decision to reopen schools in phases was a delicate choice, based on surveillance, which will continue while schools are open.

Dr Amoth spoke on the day the country witnessed a steep rise in infections with 604 cases turning positive in 24 hours.

“We have put a surveillance system in place to monitor any increased cases especially in schools.

We also plan to do random sampling in schools to be able to establish the rate of infection, if at all,” said the DG.

He said special attention had been given to teachers, students and staff with pre-existing conditions to avoid infection within institutions.

This comes barely three days after the reopening of schools with the Ministry of Education saying they are monitoring the first phase to determine what happens next.

Yesterday, Education Principal Secretary  (PS) Pelio Kipsang said the government will decide whether or not to recall the remaining classes depending on the Covid situation.

The Ministry of Education has already dispatched its officials to assess the response of learners this first week and collate the data to inform the way forward.

Dr Kipsang, who assessed schools reopening in Baringo County, said the government will closely monitor patterns for the three classes, Grade Four, Class Eight and Form Four, for a few more days. Recalling the rest of the learners will be based on their progress.

Some parents are seemingly anxious of what awaits their children and are yet to release them.

“We will be back here to assess the dynamics of full reopening,” said Kipsang’.

Projections were to have all primary and secondary school learners resume by November 2 for the second term and run through to December 23.

The PS spoke against rising fears of a second wave of infections with Health Cabinet Secretary (CS) Mutahi Kagwe revealing the bulk of the new infections are distributed mainly in the major cities of Nairobi (125), Nakuru (113) and Mombasa (87).

Kagwe also said 10 people had succumbed to the disease over the last 24 hours while 88 had recovered.

Dr Amoth raised concern over the recent behavioural patterns among Kenyans, saying if the infection prevention and control measures are not adhered to strictly as stipulated by the Ministry of Health, then a second wave will be imminent.

“The Ministry of Health has a duty to ensure we are a healthy nation. Should we witness a surge, then that will be our final option for the good of the country, said Amoth in his twitter Question and Answer session dubbed ‘Ask the DG’.

“..If infection, prevention and control measures are not adhered to strictly as stipulated, then a second wave will be imminent. However, we hope not to get there. Wash hands, sanitise; wear masks and keep physical distance,” he added.

In his online question and answer, Amoth said majority of Kenyans had disregarded Covid-19 containment measures especially after the reopening of the economy.

“Following reduced/removal of restrictions, we are experiencing a slight surge as is evidenced elsewhere globally whenever restrictions are removed.

This cannot, however, be regarded as a second phase because we have not fully flattened the curve of the first phase,” explained Amoth.

He said the decision to reopen schools was also about a generation, which could entirely be lost due to the closure of learning institutions.

“There have been challenges of teenage pregnancies, sexual and gender based violence, suicide, anxiety, depression among others. These have to be considered alongside the pandemic,” he added.

Scientifically, he explained, this age group also has the lowest attack rate.

He said the government would observe trends in the first few days of phased reopening before deciding whether to continue with the low numbers or full learning.

Education CS George Magoha on Monday urged parents to start preparing all children to resume learning in about two weeks, saying no child should be left behind.

“We have started phased reopening with three classes and we should be bold enough to observe them for one or two weeks before we decide as to whether we can risk having larger numbers,” said Magoha, when he monitored re-opening at Olympic Primary in Kibra.

Magoha urged principals and head teachers to compile a list of learners with pre-existing conditions such as asthma, so that necessary attention can be given to them in line with health protocols.

“Schools must ensure mandatory use of face masks and monitoring of body temperature for learners, staff and all other persons accessing schools, hand-washing and observance of high levels of hygiene,” said the CS.

Each learner will be expected to have at least two reusable face masks.

Although physical distancing will remain a challenge, Magoha said it will not be a bottleneck to the resolve to open schools and all children must be masked at all times. 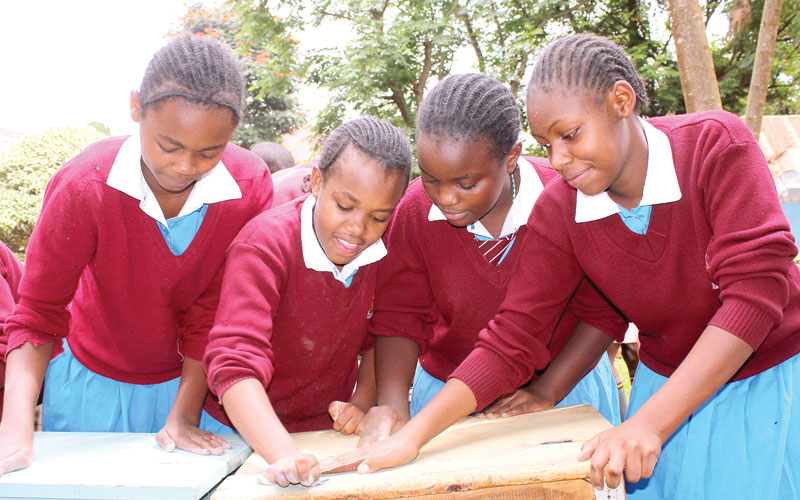