Kenya is among other East African countries facing another desert locust invasion later in the year, the United Nations  warns.

Food and Agriculture Organisation (FAO) of the UN last week cautioned that the migratory pests could still attack the region despite the consistent war to contain them.

The UN agency weather changes and mainly the wind behaviour is likely to prompt another invasion.

Hamisi Williams the Assistant FAO Representative in Kenya explained that a lot has been achieved in terms of taming the migratory pests in the country thus restoring hope to enhance food security and community livelihoods.

Further, Hamisi confirmed that Kenya’s quick intervention in combating desert locust invasion saved the region from the effects of the pest.

“Were it not for the quick response in controlling the insects, they would have flown to bordering states as their movement is easily aided by the winds,” said Hamisi.

The desert locust invaded Kenya last year in December causing serious economic and social impact to the pastoralists in Northern Kenya, having flown in from the neighbouring Somalia and Ethiopia.

“We have recorded tremendous milestones in terms of fighting the desert locusts since the first swarm was reported in the country in December 2019.

Kenya Government and development partners under the leadership of FAO managed to mobilise adequate resources to intensify the war against the pests.

“By March the pests had invaded 28 counties but the number reduced to two counties as at end of August this year, thanks to collaborations efforts by stakeholders.

Even the remaining swarms hiding in some security prone segments like Suguta Valley will soon be fully tackled.

Even those remaining have been contained to manageable levels,” said Hamisi.

The swarms he added have been reduced from a high of between 200 and 400 swarms in February when the infestation was at the peak to less than four.

The remaining swarms are currently located in some segments of Turkana and Samburu counties.  This has been aggravated by localised winds.

FAO Director in charge of Emergency and Resilience Dominique Burgeon who visited the country recently confirmed that through the efforts over 315,000 metric tonnes of cereals were saved against destruction by desert locusts. 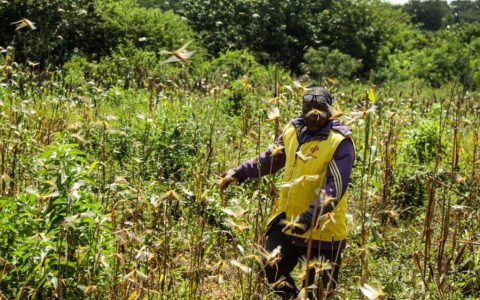