Speaking during a church service in Nairobi yesterday, Mudavadi claimed that the Handshake partners made the BBI debate look like “a one-man choir or a one-way street” where only those in support of the bill were embraced and dissenters shunned.

He said he had fallen victim to this failure by the proponents of BBI to listen to those who had divergent views, citing a case at the Bomas conference where his speech was drowned in boos and jeers as an example of the high-handedness that characterised the BBI debate.

“In Bomas, I said if we’re going to engage in a conversation of this nature and if we’re not pulling everybody along, we’re going to have difficulties and that this might turn out to be a political elite document,” he said.

According to him, the BBI proponents failed in the first instance by failing to let ordinary Kenyans own and carry the document, adding that the bill failed to capture the interests of the wananchi.

In a bold analysis of what might have led to the rejection of the bill first by the High Court and later the Court of Appeal last week, Mudavadi said leaders must learn to listen to each other to move the country forward.

“The courts have pronounced themselves on the BBI debate that has been with us for the last three-and-a-half years. The courts have made their ruling and now we must move forward. We must focus on the future,” he said. “The lessons that we must learn from the ruling is that when we don’t listen to each other, when leaders refuse to listen to each other; when they make it look like a one-man choir then the consequences are grave.”

Noting that Kenyans had spent a lot of time and resources on BBI, he said leaders should now focus on reviving the economy and giving hope to the masses whose lives have been turned upside down by the Covid-19 pandemic.

He said leaders must not prioritise the economy and the education sector among others, saying there was need to expand school infrastructure to cope with an expected surge in numbers as a result of double intake next year because of the Competency-Based Curriculum (CBC).

“We must focus on the economy, job creation and reconstructing the dislocated lives of the people because of the Covid-19 pressures,” he added. “We must bring hope into homes. We must dialogue so that we can have free and fair elections next year.”

Mudavadi also criticised ODM over calls for the sacking of IEBC chair Wafula Chebukati. He said such utterance amounted to interfering with the operations of the electoral body, saying: “Let’s let the referee do his work appropriately.”

Mudavadi also called for sobriety in handling of national matters, saying a lot of work needs to be done to move the country forward.

“Time is not on our side but if we resolve and unite and speak without selfishness, we can build an all-inclusive society,” he stated.

Interestingly, Mudavadi was one of the leaders who supported the BBI process and has been vocal about its benefits to the common man.

The reform was meant to amend the 2010 Constitution - which established a presidential system - to create, among other things, a post of prime minister, two deputy prime ministers and a leader of the opposition and increase the number of seats in parliament.

BBI has been a source of growing controversy since its launch on November 27, 2019. President Kenyatta says the constitutional review is meant to mitigate the current “winner take all” system that has caused post-election conflicts throughout the country’s history. But critics see it as a ploy by the head of state to meddle with his transition by sharing posts in the executive 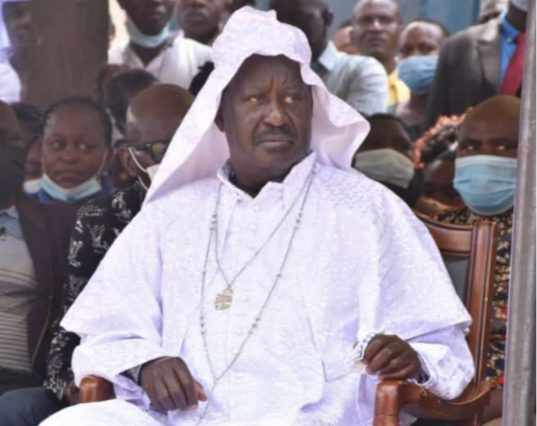