Kenya National Union of Teachers (Knut) Executive Secretary of the Garissa branch Abdirizak Hussein has raised concerns over the implementation of the Ministry of Education’s 100 per cent transition to secondary school which he fears might not be achieved in the area due to insecurity.

Abdirizak said the emerging security challenges where al Shabaab militants are targeting non-local teachers is a sure way of crippling the education sector in the area.

The Knut official said the killings of three non-local teachers at Kamuthe Primary School last week by al Shabaab militants that led to the withdrawal of non-local teachers from the four sub counties of Fafi, Ijara, Holugho and Dadaab is a big blow to the transition.

Speaking to KNA on phone, Abdirizak  said as the deadline for admitting Form Ones first approaches, most parents are opting to transfer their children to schools within Garissa Township a situation he said will further congest the schools.

He said even in the event that the students end up joining the schools, the quality of education in the institutions will be highly compromised.

“We performed dismally in last year’s Kenya Certificate of Secondary Education for lack of teachers that was largely brought about by insecurity.

With the withdrawal of non-local teachers who form the majority, then the situation would turn from bad to worse,” Abdirizak said.

“The 100 percent transition is a brilliant idea but with dwindling number of teachers, how do you expect these students to perform well”? he posed.

Abdirizak asked  the government to walk the talk and recruit more teachers, restore security in the four sub-counties so that non-local teachers can go back and teach.

He said  the government should also avail sufficient funds timely to schools in the area noting that most of the head teachers had difficulties in running the institutions for lack of funds.

“Most of the head teachers and principals have confided in me that they are admitting students not because they are able to sustain them but because they are following the directive from the ministry. Given a free hand they would not have admitted them,” he said.

According to a principal from one of the local day schools in Garissa Sub-County who requested anonymity, sustaining students was becoming almost impossible.

Reached for comment, County director of Education Khalif Isack while acknowledging that the biggest problem was overcrowding in classes especially in day schools, said a team from Nairobi was going round schools collecting data on infrastructural gap with a view to addressing the same.

Khalif said the issue of security of non-local teachers is also being addressed, adding that the weekend’s leaders meeting is part of the wider strategy of restoring security in the area.

“We are equally concerned about the security of our teachers and that is why we immediately withdrew them from Fafi, Hulugho, parts of Ijara and Dadaab following the Kamuthe attack,” he said. -KNA 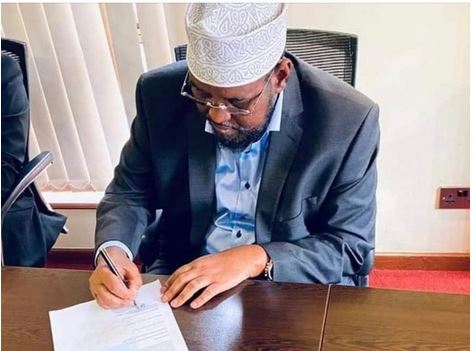