The Government intention to procure locally manufactured hospital beds from two young entrepreneurs in Githunguri, Kiambu County ran into headwinds after it emerged that one of the men was facing several criminal allegations.

The revelations were made even as a visit to the workshop where the innovators claim to have been making and storing beds that have allegedly left them wallowing in debts showed little activity with only a single ready bed in sight.

The President’s Delivery Unit Secretary Andrew Wakahiu revealed that the Government faced challenges processing the offer to procure the beds after obtaining intelligence Mungai Gathogo, 26, was facing at least three cases related to fraud and obtaining money by pretence.

Speaking in Githunguri, Mr. Wakahiu who was flanked by Gathogo further revealed that wrangles around the ownership of the firm that had first claimed to have been behind the beds further informed the Government reluctance to process the offer.

‘After we visited and made the offer, then vicious arguments on the control and management of the company between the two innovators and a man who claimed to be the real owner of the firm and that he had only contracted the duo to help market the beds emerged,’ Mr Wakahiu said.

Notwithstanding the issues, Mr Wakahiu added, the Government had gone out of its way to help the trio clear the debts it claimed it had incurred by offering to buy the entire stock of what was ready.

A lorry hired to ferry the beds the trio claimed to have already was forced to return empty after it emerged there was no such goods despite Gathogo’s oft-repeated claims in the media.

In interviews with the media and their social media pages, Gathogo and his colleague, Joseph Muhinja, have claimed to have incurred loans of more than Ksh3.5 million ostensibly to import materials for the beds and in training and recruiting of labour.

But at their workshop yesterday, there was little evidence of any activities.

‘We came here prepared to buy all the beds and other materials these young men claim to have made or procured. Regardless of the controversies around the young man and the firm’s ownership, as a Government, we don’t want their lives ruined by debt,’ Mr Wakahiu said.

Records at the Githunguri police station indicate Gathogo has at least three pending criminal cases: OB 35/05/11/2019 and OB 64/05/11/2019 relating to obtaining money by false pretence and OB 51/21/10/2020 relating to an incident over the disappearance of motor vehicle he had allegedly hired.

Mr Wakahiu explained as soon as the Government began the process of formalising the offer, a complainant from Nakuru claiming to have been conned Ksh800,000 by Gathogo emerged. Records indicate Gathogo was locked up at Githunguri police cells for three days until his father refunded.

Gathogo however claims to have given his father the money spent to secure his freedom. County Woman Representative Gathoni wa Muchomba however pleaded with the Government to forgive Gathogo and commit to purchase the beds as initially pledged saying it was normal for men in the County to get into trouble.

‘If you expect to find young men from Kiambu who have no history of visiting police station, you’ll work very hard because our men, most of the times, will find themselves in police stations because of many problems and we don’t put them in the trenches. We try and rehabilitate them,’ Wamuchomba said. 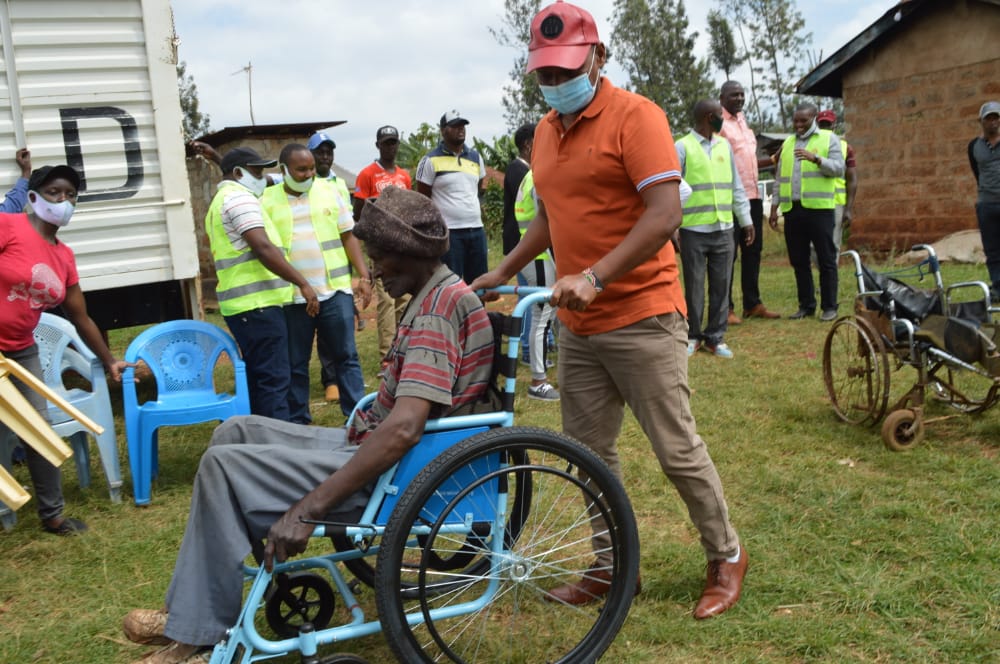 Thika MP donates equipment after a stand-off with Governor Nyoro