A parliamentary investigation report into Likoni channel tragedy has revealed that the victims of the ill-fated vehicle had not followed the proper lines when boarding MV Harambee ferry.

Probe by the Senate Committee on Roads and Transportation further reveals that the ramp of the ferry on which Mariam Kighenda and her daughter Amanda Mutheu drowned was not properly drawn which left their car at a sloping angle.

The two died when their vehicle registration number KCB 289C plunged into the ocean after slipping off MV Harambee on September 29.

The bodies of Ms Kighenda, 35, her daughter Mutheu, 4, and the wreckage of their car were retrieved on October 10th, 13 days later.

“The video replays of the incident indicate that the driver and passenger of the vehicle, the late Ms Mariam Kighenda and Amanda Mutheu had not in fact exited their vehicle nor lowered their widows which meant that they could not escape in the event that the vehicle slipped into the sea,” the committee chaired by Kiambu Senator Kimani Wamatangi says in the report tabled in the house on Thursday.

The committee observed that there was no emergency rescue vehicles at the time of the accident which meant that the victims could not be saved from drowning.

However, the house team has cautioned that some of the ferries currently in operation, particularly the older vessels do not have functional ramps which exposes users at risk of slipping overboard into the sea.

In addition, the rudimentary rescue service though in place following the accident, and more needed to be done to avoid similar incidents in the future.

On Saturday, the body of John Mutinda and his car were retrieved after plunging into the Indian Ocean early morning.

The incident rekindling memories of the Mariam Kighenda and her daughter Amanda Mutheu drowned on September 29.

According to the Kenya Ferry Services, Mutinda's car sped off the ramp at high speed.

Further, KFS noted that the driver failed to stop the vehicle despite several efforts by ferry officials to flag him down.

As such, the Senator Kimani Wamatangi-led committee has directed the agency to ensure all operating ferries have functional ramps in order to prevent of a repeat of the incident on September 29th, 2019.

“The committee recommends the halting of the defective ferries such as MV Harambee, MV Nyayo, MV Kilindini until funds are available to procure new ones,” the team held,

“The ministry of transport should ensure that all future ferry vessels have available spare parts within the market for ease maintenance,” they noted.

The committee has asked the Kenya Ferry Services (KFS) to outfit its vehicles for persons with disability in accordance with section 23 of the persons with Disability act, 2003.

Further, the committee held that KFS should ensure that it is protected from potentially adverse litigation arising from breach of occupier’s liability. 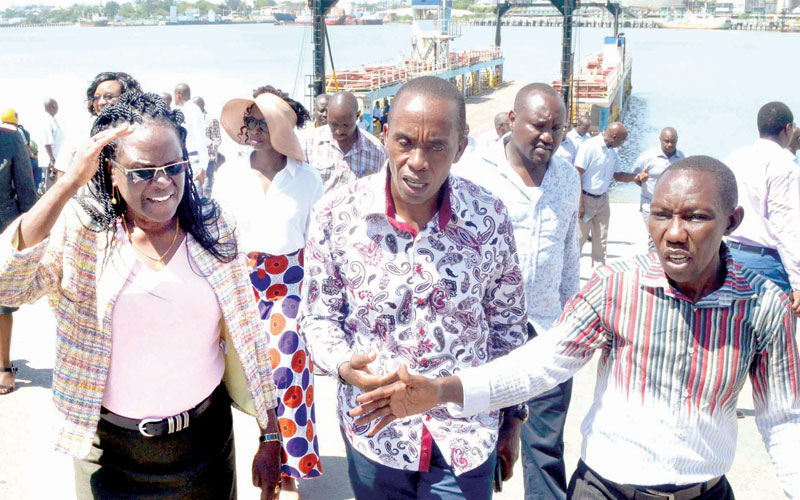 Knut surrenders, says now ready for a truce with TSC