Senators from the Coast region have protested a government directive requiring all cargo from Mombasa port be transported to Nairobi exclusively by the Standard Gauge Railway (SGR).

Led by Mombasa’s Mohamed Faki, the lawmakers said the directive was a scheme to kill the economy of the region and render jobless a majority of coast residents who entirely rely on the port for a living.

The legislators blamed Transport Cabinet Secretary James Macharia for breaking a promise on last year’s agreement that business people be allowed to choose their means of transport.

“It is very unfortunate for the CS Ministry of Transport to take advantage of the coronavirus pandemic to issue illegal directives and strangle the already battered economy of the coastal counties and others on the Northern Corridor,” Faki said in a statement to the Senate.

The Ministry of Transport recently issued a circular to all businesses to haul their cargo to other parts of the country and neighbouring countries using the SGR from June 1.

The directive, in which the CS cited the coronavirus pandemic as the reason for confining the cargo transportation to SGR, comes barely six months after the Ministry revoked an initial similar directive. Senators lobbied for the revocation of the initial order.

To cushion the coastal residents who depend on the cargo business, Senator Faki has sought the Senate’s intervention to reverse the order, saying its implementation will hurt the coastal people who rely on trucks for their daily bread.

Faki’s sentiments were shared by Kilifi Senator Steward Madzayo, who termed the latest direction unlawful and meant to add to the suffering residents.

“If there is something that was done by the government to hurt the coastal people and their economy, it is this issue of SGR,” he said.

The Kilifi Senator claimed the region’s economy has come to near-collapse since the government built the SGR.

“That is the truth. If you look at it keenly, before SGR, Mombasa had many businesses. People had jobs. But after the government came up with SGR, things have changed,” he said.

Taita Taveta Senator Johnes Mwaruma criticised the CS for not keeping his word despite agreeing that Kenya is a liberalised economy.

“Last year, leaders from Mombasa met the CS and agreed that because we are in a liberalised economy, it was good to leave the trucks to carry cargo as well as the SGR depending on how businesspeople will decide,” he said.

“I am shocked that the CS is using (the) corona (virus) to bring back the issue that had been agreed on.

It is good for leaders to respect each other. We are representing our people and we said that coastal and other regions serviced by the trucks, the economy has deteriorated.”

Kwale Senator Issa Juma Boy said the  directive by  the Ministry had driven the last nail into the coffin of the economy of the entire coastal region.

Besides the businesspeople, drivers and their families are among the millions of others directly depending on the port for a living, Boy said.

“Business in Mombasa has deteriorated and the main source of income for the people from the coast is the port. So if the cargo will not be transported by trucks, it will cause big problems.

“I suggest that we must have a way forward so that every business person earns a living.  Let this pandemic not be the reason why transporters are not allowed to transport cargo,” he said. 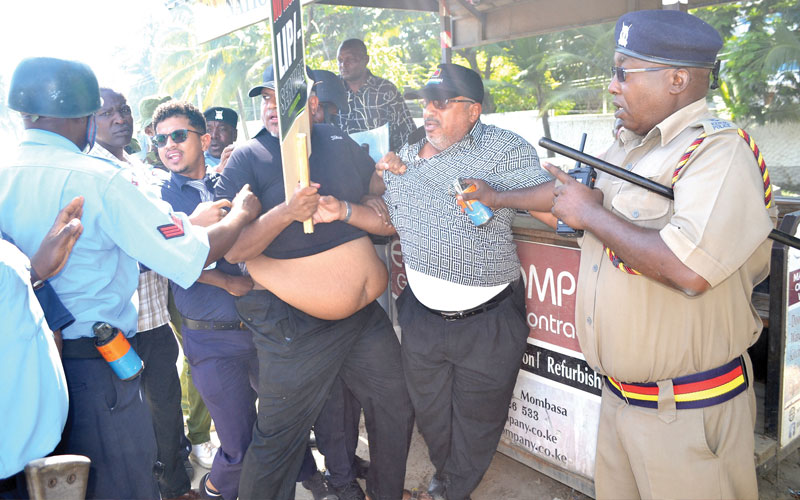 It’s all up to you, Uhuru tells Kenyans as he eases orders

Religious gatherings to resume under strict guidelines, children kept away