Nairobi Governor Mike Mbuvi on Wednesday said he initiated talks with President Uhuru Kenyatta to have the State take over management of key functions in Nairobi County.

Sonko, in a long post on his Facebook page, said handing over Nairobi to the National Government served the best interests of the city residents.

"I initiated discussions with the National Government with a view of finding a sustainable approach to service delivery," said Sonko.

On February 25, the national government took control of key services at the Nairobi City County in a move that clips the powers of Governor Mike Sonko who is facing Sh357 corruption charges.

In an unprecedented move since the creation of county governments by the 2010 Constitution, State House on Tuesday announced it will take over County Health, Transport, Public Works, Utilities and Ancillary services as well as County Government Planning and Development.

A statement signed by State House Spokesperson Kanze Dena said: “Functions of Nairobi County Government handed over to the National Government pursuant to Article 187 of the Constitution.”

Following the take-over, activist Okiya Omtatah has moved to court to block the move. 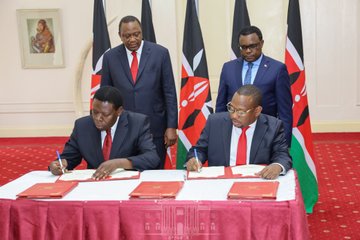 Governments urged to invest in mental health – WHO