OKA leaders lay down conditions for a 2022 coalition with Raila

One Kenya Alliance (OKA) principals met yesterday and issued two conditions to opposition leader Raila Odinga as a pre-requisite to entering a pre-election alliance with him.

The four principals led by Amani National Congress (ANC) leader Musalia Mudavadi, Wiper leader Kalonzo Musyoka, Kanu chairman Gideon Moi and Ford-Kenya’s Moses Wetangula said they were ready to accommodate Raila in a pre-2022 alliance on condition that he joins as an “equal partner” and that he backs one of them in the next presidential election.

The principals, according to sources, met at a hotel in Nairobi’s Karen neighbourhood to come up with a common front ahead of tomorrow’s meeting with President Uhuru Kenyatta and Raila.

Tomorrow’s meeting, at a yet to be disclosed location, is a follow-up to last week’s session at State House, Mombasa where the leaders failed to commit themselves to forming one movement to take on Deputy President William Ruto in next August’s election.

The President is said to have promised to convene another meeting this week after last Friday’s Court of Appeal ruling on the Building Bridges Initiative (BBI) bill.

The President has made it clear that he is ready to support any of the opposition leaders as long as they unite.

Sources privy to yesterday’s deliberations said the OKA principals are now waiting for Raila to respond to what they say are their irreducible minimums.

But reacting to the demands, ODM chairman John Mbadi said Raila does not have a debt to pay since “he has never ascended to the presidency”.

“What we need at the moment is not reciprocating for anything, but a formula through which we can capture the presidency in 2022 and thereafter offer good governance.

Those obsessed with paybacks are wasting their time,” Mbadi said.

The Minority Leader in the National Assembly said ODM is participating in the negotiations in good faith and with a view of identifying a strong candidate that would beat his opponents at the ballot.

“But let it also remain very clear that ODM has already indicated that it will field Raila as its presidential candidate,” Mbadi told People Daily by telephone.

It was an argument shared by ODM Secretary General Edwin Sifuna who compared the OKA demands to a stream wishing to be joined by a big river.

“Have you ever seen a big river like (the) Nile joining a small stream? It should be the other way round.

Our hands are open to receive them should they wish to join us. ODM is a major party that cannot be dictated by smaller entities,” Sifuna said.

Sources who attended the meeting told People Daily the leaders insist it is Raila’s turn to support one of them.

“We have met and agreed that we welcome Raila as an equal partner to OKA.

We also expect him to support one of us this time round as a way of reciprocating the support we have given him before,” said the source.

The President had also asked OKA leaders to sell their agenda but leave their options open on a single presidential candidate since from intelligence reports, none of them has the political might to defeat Ruto at the ballot without Raila’s support.

The OKA leaders have maintained they cannot work with Raila unless he joins OKA and supports one of them.

“You need to sit down and agree on how to work together. You cannot beat Ruto even if you are combined without Raila.

You need to make a decision based on realities on the ground and not hardline stand and emotions,” the source at the Mombasa meeting quoted the President as saying.

In a move seen to neutralise the nascent coalition, President Kenyatta’s Jubilee party and ODM maintain that they have the numbers and are in the business of uniting the country and will soon be formalising the coalition.

During last week’s Naivasha retreat, Kalonzo maintained that this time round they would not be forced to support anyone apart from one of their own.

“Our doors are open and we are inviting all Kenyans to join us. But let our competitors know that we are firm and resolute and nobody should pretend that they are inviting us to join them, this is already a majority,” said Kalonzo.

Wetang’ula said they will tell Kenyans what OKA administration would do for them should they form the government.

“We will be running our race and no one else’s. We will not stop and look back,” said Wetangula.

There is also a proposal that OKA could adopt the 2002 Narc model that brought together the National Alliance party of Kenya (NAK) and Liberal Development Party (LDP) in a coalition which propelled Mwai Kibaki to power.

Under the model, members of the coalition conduct joint grassroots elections and the winner is handed the coalition’s ticket without necessarily abandoning their mother parties. 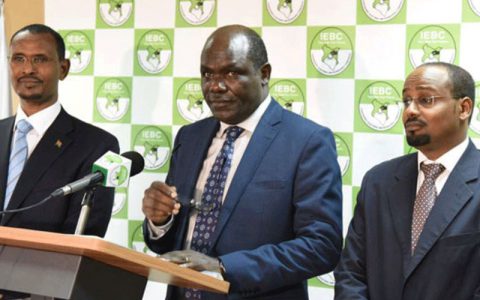