Football Kenya Federation Women Premier League FKF-WPL could be entering its seven round of the current season this weekend, but a heightened pressure to succeed is increasing by the day as teams battle to win the league this year.

Last weekend, the league recorded 11 goals, the fewest of goals so far in the 131 goals scored since the league started, an indication that the competition in the league is tightening up.

Also last weekend and for the first time, the league recorded two draws, something that has not happened in the previous five rounds.

A critical moment of crunch time is thus building up and the pressure to keep moving forward will even go a notch higher this weekend as all the twelve teams in the league come face to face with each other seeking to outplay one another for the much needed three points.

Three-time league champions Vihiga Queens still leads the way despite dropping two crucial points at the weekend and are keen to steady their ship when they make a trip to Nairobi to take on coach Bernard Kitolo’s coached side Zetech Sparks at GEMS Cambridge Ngong Road.

Gaspo on the other hand and after halting Vihiga’s winning run, are at home against visiting Wadadai FC, in a match scheduled at Absa Sports Club, Nairobi.

Gaspo led by passionate coach Domitila Wangui Armani is second on the log while Wadadia who clobbered Kayole Starlets 2-0 courtesy of Carolyne Khaemba’s brace to collect their third win of the season, sit fifth and are poised to go for Gaspo’s scalp.

Promising and newcomers Bunyore Starlets who have, however, lost three matches in a row are keen to end the worrying trend and bounce back strongly when they come one on one with fellow strugglers Kayole Starlets at Mumboha Stadium, Luanda.

Ulinzi Starlets on the other hand will be seeking to build on their momentum as they welcome tough Trans Nzoia Falcons at Ruaraka Ground, Nairobi while Nakuru City Queens are at home to welcome much improved Kisumu Starlets at ASK Showground, Nakuru. 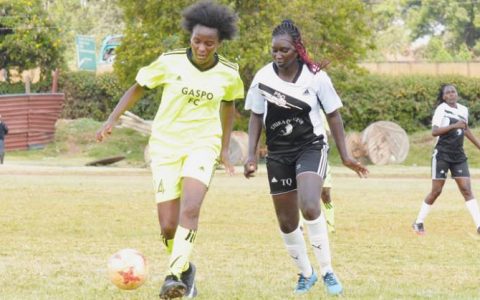