Q: Devolution has just turned seven years, as the CoG chairman, do you think it has lived up to its billing?

A: Luckily, I have been in charge of Kakamega County since inception of devolution in 2013.

I can tell you that devolution has transformed the lives of many people in the rural areas.

I have had an opportunity to travel across the country and I must say a lot has changed with  the coming of devolution.

At least there is a change in environment and improved livelihoods in every county.

So, to me devolution, despite the challenges we have had, has worked and is working at the moment.

We are seeing a growing trend where just a few individuals continue to benefit from fraudulent connections, at the expense of struggling wananchi, what is your take?

I don’t know of an individual who has benefitted, may be you are referring to the many corruption cases that are in court.

Unfortunately, we have heard of  many corrupt practices, but no governor at the moment, has been jailed over graft related offences.

However, I must say that there have been corrupt tendencies in the counties. But the problem has been weak systems and weak internal financial controls.

It is the same case in most of these institutions across the country. We have to live with it.

Do you believe that rise in graft in counties is because governors are held hostage by Members of County Assemblies, who demand handouts from the county bosses?

That is not true, at least for my case I can say Ward Reps have not put me under pressure.

This could be coming from governors with no political experience. It is the talk in other counties but you cannot use that, as an excuse to do wrong things.

It is unfortunate to hear you say that we have to live with corruption, at a time most Kenyans are struggling, especially during these trying times of the Covid-19 pandemic. How does this make you feel?

Unless there are proper financial control systems, we will not get it right. But you don’t also fight corruption by using political systems where some alleged corrupt individuals are arrested, then you don’t hear of the case after several months or years. We have to condemn this practice.

Where does the biggest threat to devolution emanate? Is it from the Executive over-reach like we have seen in Nairobi?

The other threat to devolution is corruption. It has to be fought in a proper manner.

What is the solution to the current impasse on Revenue Sharing Formula?

The impasse is unfortunate. The law provides very well that in the first six years, there will be the first law that lasts three years and the second formula which will again last three years and subsequently, from the third generational formula, it will now last for five years.

The Commission on Revenue Allocation was expected to understand the dynamics of devolution, what the issues were and after six years, they were expected come up with a formula that takes us to the longer period.

This particular formula was delayed at the Senate. At that time, I came up with a suggestion to use the over Sh20 billion Equalization Fund, so that all those counties that were losing could be compensated using part of that money and we move on.

What are your plans for 2022, are you aiming for a higher political seat and is this a conversation you have had with your party leader Raila Odinga?

I  have said it clearly that after 2022 I will not be playing county politics anymore, but my first responsibility now is to ensure that I strengthen my party ODM, so that the party is able to capture power in 2022.

We have consulted and I have told him I will go for a higher position, whichever position comes, will be dependent on the dynamics. I am ripe for the higher seat. 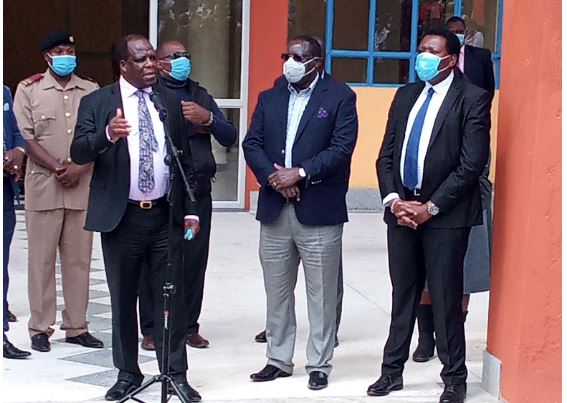