Kiambu Governor disowns Gakuyo’s statements against women, set to kick him out of office

Kiambu governor James Nyoro has distanced himself from remarks made by his political advisor David Kariuki Ngari alias Gakuyo.

The sentiments by Gakuyo were interpreted to be hateful and demeaning women.

Nyoro who spoke at a local television station said he has initiated the process of kicking out Gakuyo from his administration stating that he has further reached out to him asking him to apologise to women.

"Come February 9, public servants who have declared interest in elective seats will be resigning and in my capacity, I have initiated the process of kicking out Gakuyo from my administration," Nyoro said.

The remarks which Gakuyo, a Thika town parliamentary aspirant made during Nyoro's event in the busy town on December 7 and which were directed to his rival challenger Alice Wambui Ng'ang'a sparked fury among women including female parliamentarians who staged demonstrations paralysing activities within the industrious town.

Nyoro said that the unprintable statements made by Gakuyo watered down the commissioning of a fire engine for use by Thika residents.

"I organized the event in good faith and with a desire to help our people fight calamities such as fire outbreaks, but the event turned political with every politician seeking to garner mileage from it," he said.

Going forward, Nyoro vowed that he will not allow any politician to disrupt his political gatherings saying that he requires both the support of Gakuyo followers and those who rally behind Ng'ang'a's candidature.

"I have no preferred candidate. I want to be elected by all people including the supporters of Gakuyo and those of Alice Ng'ang'a," he said.

At the same time, Nyoro revealed that he brought Gakuyo to his government to help him clear the debts that he owed to the people. 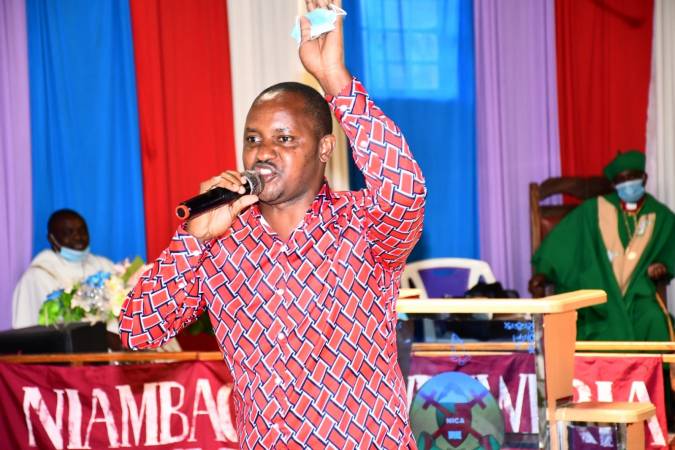