Muthama argues that the existence of many tribal parties was dangerous as the country gears up for a General Election next year.

Speaking on Saturday night after a day-long, closed-door meeting with political aspirants drawn from Machakos County at his Mua home, Muthama urged Jubilee Party to amalgamate with their handshake partners Orange Democratic Movement (ODM) to form one party while Musalia Mudavadi’s ANC teams up with his Ford Kenya allies and Wiper party for a second front while his UDA party will be wooing other like-minded players to form a third party with a national image.

“My dream is to see a country with only three strong parties. And this will force Kalonzo, Mudavadi and Wetang’ula in one corner and form one political party otherwise they are doomed to fail come 2022. And this will also force Raila Odinga to sit down with President Uhuru Kenyatta and form another party while we in Hustler Movement pull from the other side,” said Muthama.

Muthama said that his newly founded party has emerged to be an all-inclusive outfit drawing representation from all parts of the country.

Buoyed by the recent Msambweni by-election win for by Feisal Bader, an ally of Deputy President William Ruto, Muthama said the party would take a cautious approach towards coalitions with ‘small tribal’ parties twith a view to maintaining a national outlook.

Muthama’s new party has fielded Urbanus Muthama Ngengele for Machakos senatorial by-election that was occasioned by the death of Boniface Kabaka last month. 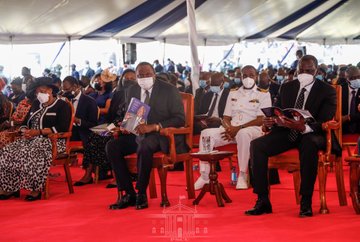