Top police chiefs on the spot over juniors’ protest

A video recording of a song by a police officer narrating alleged frustrations that her colleagues go through has exposed the soft underbelly of the National Police Service top command with emerging reports of a department that is bedeviled with bad blood between seniors and their juniors.

So bad is the relationship that sources within the disciplined service are warning of “possible anarchy” unless the Ministry of Interior intervenes urgently.

“The rant is just the tip of the iceberg. It is not a case of indiscipline, but a cry for attention that needs thorough investigations and remedial action taken.

Things have gone wrong in the service and junior officers have resorted to ventilating their frustrations and airing their grievances through social media,” a senior officer said.

For a long time, the police uniform represented state authority and placed the wearer on a pedestal.

Consequently, officers in uniform have always been expected to exercise restraint on any unlawful activities to, among other things, uphold the sanctity and dignity of the uniform.

However, despite Inspector General of Police Hillary Mutyambai warning that officers who resorted to social media to air their grievances risked serious disciplinary action or even criminal consequences, the female police officer and her male colleague have composed a song narrating alleged frustrations in the service.

Reached for comment, Mutyambai neither picked our calls nor responded to text messages.

Opinion is, however, divided on the video, released barely a week after the IG issued a stern warning, that has since gone viral.

“The Service Standing Orders (SSO) and disciplinary procedures are a sham. Sanctity of the uniform has been thrown to the dogs,” another senior officer, who requested anonymity told People Daily.

A former officer said there was an increase in cases where policemen openly expressed defiance, which, he said, was an indication of growing frustrations in the service.

“The cases need to be nipped in the bud. It is the primary duty of officers to be disciplined. Such cases, however isolated, can harm the reputation of the entire police fraternity,” he said.

In response to the viral video, National Police Service Commission (NPSC) chairman Eliud Kinuthia asked Mutyambai to take stern disciplinary action against officers, who have become activists and were contravening the SSO by purporting to agitate for the welfare of their colleagues.

“The IG should use his powers enshrined in the NPS Act to suspend, dismiss and even remove from the service the concerned officers. This cannot be condoned,” Kinuthia warned.

But his predecessor, Johnstone Kavuludi, under whose tenure the service went through a radical purge aimed at weeding out bad elements, differed with his successor, and called for “deep soul searching and mutual dialogue between the top command and juniors”.

“This is just a tip of the iceberg. This song and dance is not musical, it is not just a manifestation of deep-rooted indiscipline, real and not fictional,” he said.

Constable Viviana Williams, together with a man in police uniform believed to be an officer, says she is no longer interested in the job due to frustrations.

She adds that most officers are suffering in silence, and reveals that the service is riddled with corruption, envy, favouritism, and suicide by junior officers.

In an earlier complaint two months ago, the officer was recorded saying:  “Sir, kindly allow me to resign peacefully from the police officer post because I can thrive elsewhere. Even if it means resigning without pay, I will not mind,” she said.

Despite being aware of the consequences, the officer seems to have thrown caution to the wind and joined a growing list of her colleagues who are turning to social media to air their grievances, get attention and even share confidential police information.

According to the National Police Service Act, it is an offence for an officer to, without proper authority, disclose any information concerning police matters or any investigation.

The regulations also require that officers using media, including social media, must at all times abide by standards of professional behaviour under the police code of conduct.

Officers should not communicate information that may be considered defamatory, aggressive material including threats or that promotes illegal acts, and most importantly any other form of communication that may be prejudicial to the integrity and good image of the service.

Kavuludi said there is a need to oversee internal discipline and grievance investigation to ensure that officers are dealt with dignity and respect. Those who harass their juniors should also be held to account.

Police regulations require that the welfare of officers is addressed, including simple things like visiting sick officers or interviewing and assisting those in difficulties domestically.

“The officer in local command of a formation is primarily responsible for the welfare of those serving under him and is responsible for identifying deficiencies in welfare measures, reasons for discontent and poor morale, and remedying them,” the Service Standing Orders (SSO) state.

Officers have also warned against sharing information with the press without authority.

The perceived increase in use of social media has been attributed to frustration by senior officers, communication breakdown within the service and reports that some complaints are either never investigated or take too long to be addressed.

“Police work, especially for junior officers, can be stressful. Some of them are depressed and taking disciplinary action against them should not be the priority. Such complaints can be dealt with through fairness especially in promotions, transfers, deployment among other areas,” he said.

The officers have, however, been advised to channel their grievances through the Complaints and Gender desks or to the Internal Affairs Unit (IAU).

The disconnect between the police commanders and those that they manage is now being blamed for the increased cases of suicides among the juniors as well as the rising incidents of those in the lower cadre turning their guns on their immediate supervisors.

Unofficial police statistics indicate that at least six senior police officers have been shot dead by their juniors since the beginning of the year while more than 15 others have committed suicide during the same period.

Besides the breakdown of communication between the top command and juniors, Mutyambai’s administration is also being accused of doing little on police reforms.

“The much-anticipated police reforms seem to have ended with the introduction of the Persian blue uniforms.

Unlike in the previous administration of Joseph Boinett when workshops, meetings and inspection of police stations were inspected to advance the reforms, under the current administration, the reforms have stalled,” one senior officer said.

The SSOs prohibit information transmission by members of the service on social media unless they can clearly be linked to the conduct of official business.

But junior officers accuse their seniors of slamming doors of communication, saying there are no channels for them to air their frustrations and grievances.

“Most of our seniors live in the proverbial ivory towers. We hardly reach them to tell them our problems and even if you are lucky enough to access them, they will always dismiss you,” said one of the juniors. 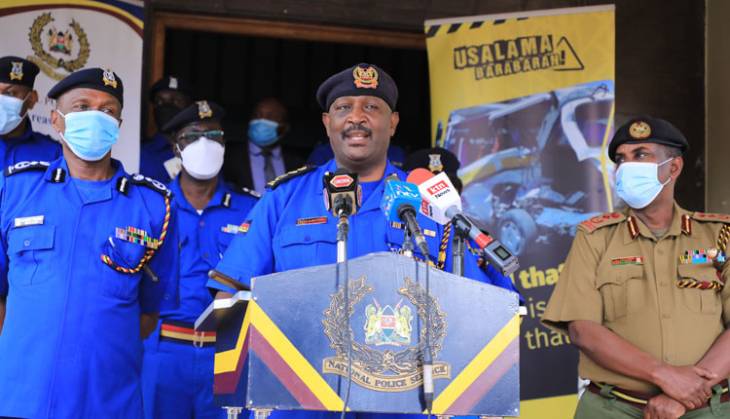