The war of words between Deputy President William Ruto and allies of President Uhuru Kenyatta is yet to take a rest.

Jubilee Secretary General Raphael Tuju on Monday, September 6, yet again took a dig at the DP challenging him to explain how he got his billions yet a few years ago his net value was at Ksh100 million.

In a press conference at Jubilee party headquarters in Pangani, Nairobi, Tuju revisited a 2015 video clip on which DP Ruto declared his wealth and questioned how he expanded his empire within a very short period.

"By his own account, the Deputy President is on Video record when he told Kenyans that he was worth 100 million Kenya shillings in the year 2015. In the intervening seven years. He has “worked very hard” in his businesses and now therefore he has assets like choppers, hotels and land worth Billions of shillings," Tuju said.

The Jubilee SG, at the same time, wondered how the DP was able to build his fortunes at a time when he was required to discharge his mandate as the country's second in command, attend classes as a PhD student, be present at several fundraising events on the weekends and also run a presidential campaign.

He challenged DP Ruto to share his secrets to Kenyans who are convinced beyond reasonable doubt that it is impossible to juggle those many roles while building a business empire worth billions of shillings.

"We do not expect him to give his personal land. But given his good heart and in the spirit of the Chinese saying that do not give one a fish but show somebody how to fish, he can greatly help. May it please His Excellency the DP, Dr William Ruto, EGH, UPL, DL, CH to show these our young people all the skills on how to acquire such property in such a short time," Tuju stated.

"He should teach us the clueless adults. We may not possess his supernatural powers of hard work. But teach us apart from the wheelbarrows. Show us another way to perform such miracles," he added. 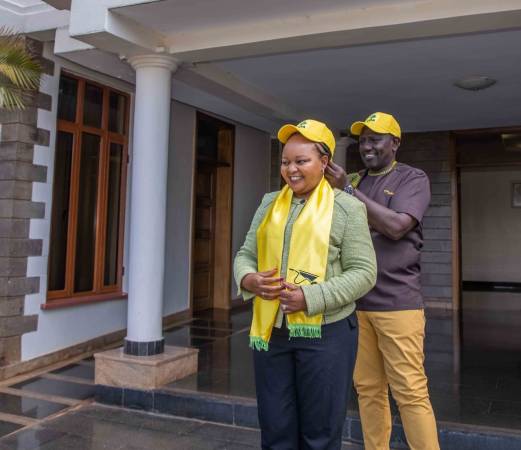