The best performing counties so far, according to the data, include the sparsely populated counties of Samburu, Elgeyo Marakwet and Wajir.

They are among 10 counties that have registered the highest percentage of new voters since the exercise kicked off on Monday last week.

The update shows seven of the bottom  10 counties are from the President’s Mt Kenya region.

The other counties in the bottom ten are Mombasa, Nairobi and Kitui counties, which had a two per cent point achievement.

Also missing from the top ten list are counties in Raila’s strongholds of Nyanza and Coast regions.

A status update on the continuous voter registration exercise shows that for the last seven days, IEBC has registered only 202,518 new voters out of the weekly target of 1,500,000 voters.

IEBC launched the enhanced voter registration exercise on Monday last week where it announced that it expects to register at least six million new voters in the drive conducted at the Ward level.

However, the commission said that a total of 5,206 requests for voter transfer were serviced at the 290 constituency offices.

“The commission targets to register six million new eligible Kenyans, on the basis of information from the Kenya National Bureau of Statistics 2019 Kenya Population and Housing Census report.

The target was disaggregated to each county, constituency and county assembly ward to enable monitoring of progress.

For the last seven days, the commission has registered 202,518 new voters out of the weekly target of 1,500,000,” reads a statement signed by IEBC chairperson Wafula Chebukati.

He attributed the low turnout to apathy and insecurity in parts of Lamu, Baringo and Laikipia counties and along Kenya-Somalia border.

Others include lack of National Identity cards as well as the culture of last-minute rush.

“In 2017, the commission took note that Kenyans did not optimally utilise the early days to register.

The consequence was a mad rush and long queues in the last days to the close of the registration drive.

Let us reverse this trend by shedding off the tag of ‘last-minute Kenyan rush,” said Chebukati.

“As a strategy of ensuring eligible voters turn up in large numbers, the commission has hired voter mobilisers in the 290 constituencies to create enthusiasm and awareness of the exercise,” he added.

The poor performance in the Mt Kenya region comes despite heightened campaigns by the area leaders asking people to register.

Under the Mt Kenya Unity Forum, the leaders who include Narc Kenya and forums spokesperson Martha Karua and Gatundu South MP Moses Kuria, the leaders said they target to add three million voters to the roll from the region.

According to Karua, the region currently boasts of seven million voters and they are planning to increase this number to 10 million when the voter registration exercise closes.

“In total, the commission has deployed 7,720 BVR kits. The distribution of the BVR kits in the Wards is meant to ensure accessibility of Registration Centres by new voters who would otherwise be discouraged by long distances to Registration Centres,” said Chebukati.

At the same time, Chebukati said they have suspended voter Registration in Areas with By-Elections and Legal Petitions pursuant to Section 5 of the Elections Act.

The poor performance in the voter registration exercise came even as various counties continued to record low numbers of voter turnout.

In Laikipia, only 984 voters were registered in the last four days with the county elections manager Agnes Mutisya revealing that in Laikipia West Sub County 461 voters had been registered by Thursday last week while Laikipia East and Laikipia North had 247 and 276 registered voters respectively.

In Embu County, Mbeere South MP Geoffrey King’ang’i has challenged IEBC officials in the area to change tack to reach more voters after it emerged that approximately 150 people had been registered since the exercise kicked off five days ago despite a target of 9,000.

Lamu West MP Stanley Muthama decried the low voter registration after IEBC officials raised concerns over low turnout as only 350 new voters had been registered in the 27 registration stations across the county.

“IEBC had asked the Treasury to allocate it Sh40 billion but were issued only Sh26 billion which is not enough for them to conduct sensitisation programmes and campaigns on mass voter registration,” he said.

In Baringo County, lack of identification cards and high level of illiteracy especially in Tiaty sub-county has been cited as the major reason hampering voter registration in the region.

In Siaya County, only three per cent of the target populations had been registered since the beginning of the exercise.

Siaya County Elections Manager Ruth Kulundu said the county had managed a paltry 3,151 new-registered voters by Friday last week yet they had a daily target of at least 3,500 new voters.

In Nandi County, the commission’s Election Manager Catherine Bulinda blamed the low turnout of voter registration on politicians whom she said had not come out to mobilise residents. 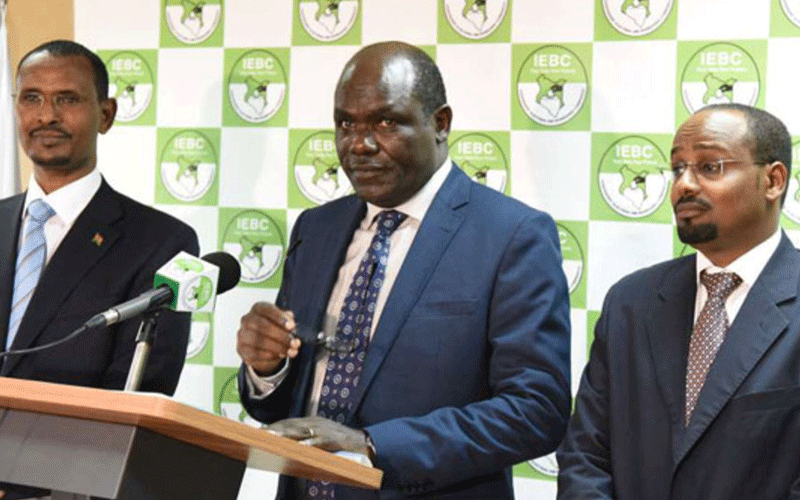