Why journalists feel neglected in the fight against coronavirus

Since news broke in March that Kenya had the first confirmed Covid-19 case, members of the Fourth Estate have been at the forefront of gathering and fact- checking to keep the public informed.

While in their line of duty, just like other professionals, journalists too face multiple challenges, ranging from the risk of contracting the virus to financial constraints.

Media industry is among the hardest hit by the Covid-19 crisis, which has disrupted business by the nationwide dusk-to-dawn curfew and Corona restrictions.

Journalists wake up daily to piece together facts to tell a concise and credible story, though some of them have endured pain in silence.

For instance, sometimes in April, Yvonne Mutunga, a Mombasa-based correspondent with an online news platform, has been unable to fend for herself.

The impact of Covid-19 pandemic was slowly scooping away revenue streams from the media industry.

“Covid-19 has affected me financially and mentally and even at my field of work.

As a correspondent, we are paid per story. However, since the coronavirus outbreak, the number of stories being published has dropped drastically.

Sometimes I end up having only three stories published the whole month.”

While some continue to receive slashed salaries, correspondents are finding it hard to survive. Their earnings have reduced tremendously.

“Majority of Kenyans assume journalists have plenty of money. They are just messengers who sometimes sleep on empty stomachs.

Sometimes journalists, especially correspondents in rural areas, feel neglected or forgotten by society despite us being in the front line, exposing ourselves to the virus so as to make sure Kenyans are informed,” she said.

Peter Kombe, 35, is another Mombasa-based journalist who has been hit hard by the pandemic.

Father of two says his monthly income has reduced. He is struggling to feed his family. “Salary I used to get before the pandemic has significantly reduced.

I could   produce at least three stories a day, but currently I can only manage a story a day or two.

I have never tested positive for the disease but I am financially constrained,” he said.

He continued:  “I would like to urge the government to come to the aid of the media industry and establish a kitty to cushion journalists.

The future for the industry looks bleak with the shrinking revenue streams. This means that the independence is also compromised by the massive sackings of journalists in the mainstream media.”

Media Council of Kenya (MCK) says journalists are dependent on news gathering and reporting, which have been curtailed due to a shut down on businesses, meetings and other social gatherings across the nation.

MCK Head of Media Development and Strategy, Victor Bwire, says that since the first Covid-19 case was reported in the country in March, over 200 journalists and media practitioners have lost jobs.

At least 10 journalists have tested positive for the virus while about 30 others had to go in isolation.

In Kilifi where 14 journalists are reported to have come into contact with Deputy governor Gideon Saburi, they were forced to go in isolation after he tested positive for the disease.

In Kisumu, four journalists were isolated while in Nairobi more than 20 media practitioners have been affected.

Bwire says that the disruption caused by the coronavirus has affected independent journalism due to lack of information caused by change in the working environment.

We have called for national debate on the future of the media industry post Covid-19. Journalists are not only the biggest casualties of the pandemic, but are the forgotten frontline soldiers,” Bwire said.

Kenya Union of Journalists (KUJ) Chairperson Coast Region Chapter Malemba Mkongo says that journalists remain on the frontline – reporting on all aspects of the virus to help Kenyans understand exactly what is happening.

“Besides being equally exposed to infection, the worse is – they are facing layoff, salary reduction and hunger.

They continue to produce stories but due to the worsening economic situation, many media houses can no longer guarantee their means of survival,” she added.

However, in the midst of the pandemic, journalists are fundraising among themselves to help those who are really in need.

Government has instituted a raft of measures to combat the spread of the virus, including a dusk-to-dawn curfew.

Despite journalists being listed as essential service providers, police continue to attack them while enforcing some of the measures.

On March 27, Kenya’s first day of curfew, police in Mombasa allegedly assaulted Peter Wainana, a journalist with a television station. Wainaina was filming the officers brutalising people queuing to board a ferry back home.

On March 29, police attacked George Muriithi, a local television camera person based in Embu County as he filmed government administrators beating up women in the market to enforce social distancing rules.

Three Eldoret based journalists were also arrested on the same day – reportedly for violating the curfew in Uasin Gishu and Kiambu counties. 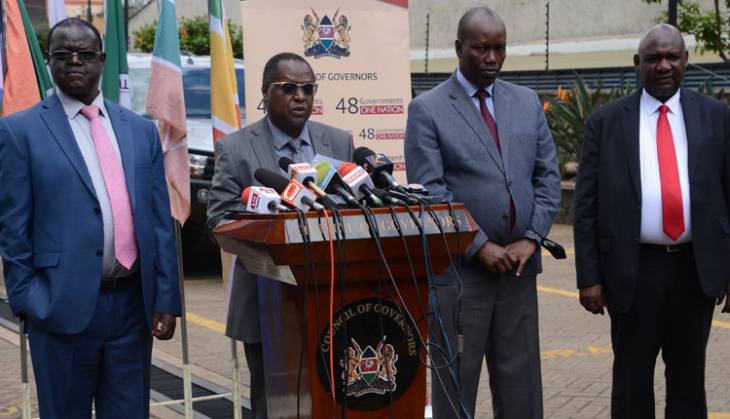 I was scared I’d be arrested for abortion