Why plan to celebrate decade of New Constitution may fail

They say you do not refuse to be called, but may not agree with what you are called for.

So when last week, my nemesis – none other than the governor himself – asked me to see him in his office, I obliged, my disdain of him notwithstanding.

“Bwana Gwinso, in politics there are no permanent enemies,” he said after we had exchanged pleasantries.

I remained guarded in my response, for I was not quite sure where all this new found warmth was leading to.

“Do you remember how tight we were 10 years ago when we first entered politics?”

“Yes. We were great friends,” said. I immediately sensed he was up to something untoward. “But Bwana governor, are we enemies now?” I asked, just to test the waters.

“Not at all. But some people have been spreading malicious rumours about me and you.”

Had it not been for my legendary good manners, I would have asked him why he was not supporting to my 2022 gubernatorial ambitions.

By the way, this man, who has already served his two terms, behaves as if he wants to succeed himself.

He has been busy erecting billboards, complete with his huge portrait, announcing upcoming projects which he claims are his personal initiatives.

Interestingly, these projects have been permanently upcoming!

“Senator?” I asked, genuinely puzzled. I had not known this at all.

I now understood the meaning of the upcoming projects, but I was at a loss as to where all this talk was headed to.

“Bwana Gwinso, are you aware of what our country will be celebrating next Thursday, on August 27?” he asked, puzzling me the more.

He broke into a wry smile and said, “It will be 10 years since we promulgated the new constitution.”

“Ok,” I said, still wondering what was so big about this day.

“Let’s we use this historic day and organise a function to remind the people of our achievements in the last 10 years we have been in leadership positions, you as MCA and me as governor.”

That sounded sensible to me. However, I quickly remembered that we were living in Covid-19 times, so a public function would not work. I reminded the county boss of the fact.

“Bwana Gwinso, you are forgetting who I am?”

“Of course you are the governor.”

“So who can stop me from holding a function in my county?”

“I know you are wondering why I chose you out of all the MCAs. It is because I recognise your achievements in your ward. You are the perfect replacement for me in 2022.”

I could not believe my ears. This man, who had been heard saying I was best suited for the post of the chairman of a cattle dip, was now showering me with praises?

What was the cause of this sudden change of heart? Even though I was sceptical, I decided to give him the benefit of the doubt.

“So where do you propose we hold the function?” I asked.

“Before we decide on the venue, can we note down our achievements,” he said picking a pen.

Well, this caught me off-guard. I could not immediately think of any tangible achievement, but trust my mouth to come up with an answer when cornered.

“What of the roads, market centres and early childhood education projects?”

“Sure, bwana governor, the county executives have been very efficient,” I responded.

“But surely, the ward development funds which I gave you MCAs have really uplifted your wards,” he remarked.

“Yes. Most of us have made good use of these funds provided by the national government.”

The county supremo must have realised that I was deliberately downplaying his achievements.

He gave me an angry look and declared he was no longer interested in the function. Realising my presence in his office was no longer desirable, I left.

I still have a mind to organise a function on August 27 to celebrate my achievements in my ward which I have represented for the last ten years - only if the senators will have passed the division of revenue bill, or else wacha ikae. – [email protected] 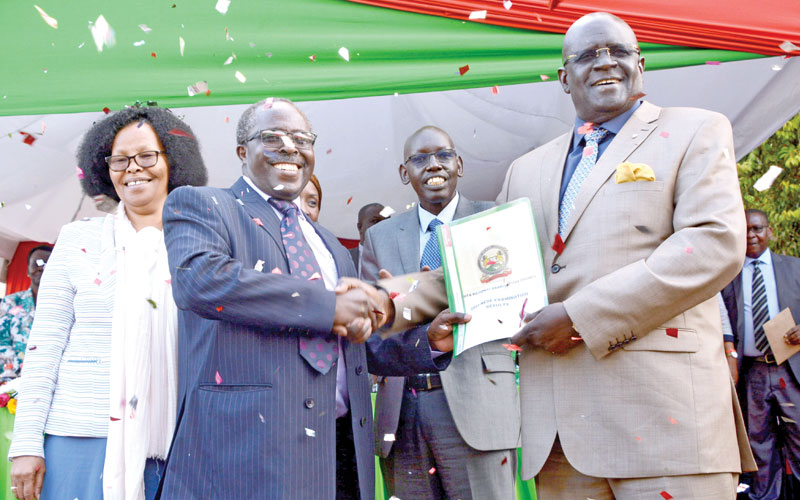