The events in Murang’a county on Sunday where two youths, including a 15-year-old, were killed in political violence linked to 2022 campaigns is an ugly act that shows length at which politicians are ready to go to ascend to or retain power and fame.

While details on who played what role in planning the fracas remain controversial, it is clear that youths from as far as Kiambu and Nairobi, and who have no business in Murang’a politics were used to cause mayhem in the name of politics and on behalf of some politicians.

Or what was a youth from Nairobi captured by a photojournalist in the protest donning a T-shirt emblazoned with a portrait of a certain politician and another known from Kiambu reported to be a social media propagandist of the same politician doing in the Murang’a church event?

Though no demonstrator may confess what instructions they were given and by whom, it is clear they were hired by politicians to perpetuate political terror, which they did and killed two young men.

Such shameless activities are not common in Mt Kenya region and from the look of things, it might be the order of the day where goons will be earning petty handouts by moving from one county to the other to cause violence in the fight for the region’s soul.

Even as the nation asks police to bring the culprits to book, the youth must shun politicians whose modus operandi is causing chaos for political expedience.

The politicians responsible for the Murang’a chaos should be ashamed that someone died prematurely because of foolish activities meant to give them short-term glory in the eyes of other politicians.

What is even more shameful is that one wing of the political factions, whose backers featured prominently in the ugly incident, have moved on as though nothing happened on Sunday and forgot that two families are mourning their kin courtesy of their irresponsible actions.

Instead, camps are busy running twisted narratives on social media on what happened or who played what role in the chaos that can only be blamed on the early and unnecessary 2022 campaigns which President Uhuru Kenyatta has continued to discourage.

Such behaviour and the continued use of the “hustlers vs dynasties” slogan by a section of the political divide is a toxic combination that should be discouraged and condemned because they will only divide the country and erode the gains made by Uhuru and former Prime Minister Raila Odinga, under the Building Bridges Initiative (BBI), to unite the nation.

The ‘hustlers vs dynasties’ is nothing short of a well calculated plan by some politicians to incite and plot to divide Kenyans on the basis of riches and poverty to advance 2022 ambitions.

Such campaign slogan is dangerous and hypocritical and aimed to manipulate lower-class people against the perceived rich for selfish political gains and that is why you are witnessing political chaos where the youth who are at the bottom of the pyramid are being misused.

While a good number of Kenyans need to have their economic status alleviated, it is unfathomable for a wealthy politician who holds a powerful position in government to manipulate ‘poor’ people to get power by misusing their plight as a campaign tool instead of addressing it. — The writer is the chairman of Mt Kenya Youth Caucus lobby group 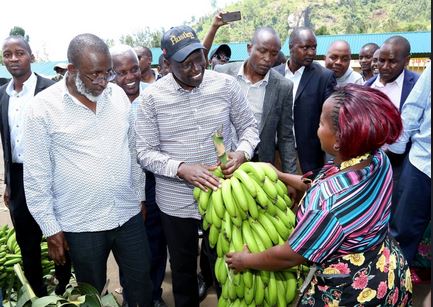 Nothing will stop me from being the next President, says Ruto

What will it take for our farmers to be resilient?