The recent happening in the country are unfolding just like a few political pundits have predicted. Postponement of the August, 2022 General Election and the race to succeed President Uhuru Kenyatta will be dominant in the public domain for some time, maybe until the elections are held.

Infrastructural development that will anchor the next president’s efforts in taking Kenyans out of economic insecurity, the fight against corruption, uniting Kenyans and the President’s development prowess in distribution of grand development projects all over the country, speak of an interesting campaign period ahead.

No region has remained untouched in a big way by the grand development. The projects were launched in Nyanza region, Ukambani, the Sh10 billion fisheries project in the Coast among other projects.

Counties like Kakamega, Tana River, Taita Taveta and Murang’a among others have leveraged on grand infrastructural investments, to tap on opportunities to work on markets beyond Kenya.

The fight against graft has seen the President give the political goodwill and the multi-agency approach is bearing fruit already.

In a nutshell, political campaigns will have to address continuity and just like one politician opined recently on a national  television; the President may want to take some time towards the turn of the year, and showcase the great strides he has made in investing in projects that have changed the lives of Kenyans.

But corruption is emerging as a real issue that will define the evaluation of the political class.

It is one ill that has affected this country and as a society, we have continued to either aid or abet theft of public funds.

If I may echo the words of Dr Ouma Oluga: we cannot afford to trivialise, triabalise and politicise corruption.

In doing so, we will essentially be glorifying if not perpetuating corruption.

Unfortunately, politicisation of corruption has become the new normal and any graft suspect has normalised the art; taking advantage of the mediatised society to self-broadcast their cries as martyrs being persecuted for their political affiliations.

The arrest of Mathira MP Rigathi Gachagua, is a case at hand. The Hustler nation led by the chief hustler himself has gone overboard arguing that this is not prosecution, but persecution of  ‘hustlers’ chief proponents.

Anyone who follows Kenyan politics keenly would definitely be a big fan of Gachagua.

Therefore, it would be a great statement on the war against graft if Gachagua’s arrest is treated as a corruption allegation and the process expedited to ensure that this hustler narrative that he is being persecuted is debunked.

Granted, corruption allegations are adjudicated in courts of law and whereas Gachagua made it clear that he is happy the courts will deal with these allegations once and for all, how the Hustler nation supporters have consistently politicised and trivialised does speak loudly about what lies ahead; if we board the hustler nation.

Sh12 billion is an amount that can finance three counties annual budgets. That is the amount we are talking about.

Whether it is politicians settling their scores or not, Kenyans have this one question: did you steal public money?

The crux for Kenyans is not politics but theft of public funds and therefore, if political differences is our route to nabbing the corrupt, then why not.

This route should not be looked as the end in itself, but the means. It si the means for the accused to clear their names , and the surest route to prove that thieves cannot hide behind political differences.

At the end of the day, our courts have the task of separating corrupt individuals from those who are followed because of their political persuasions. — [email protected] 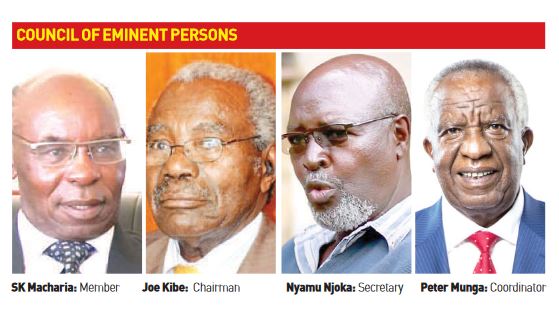