AFC Leopards captain  Marvin Nabwire and midfielder Daniel Musamali are on the verge of leaving the club for Police FC.

The two were recently involved in the National Police Service (NPS) recruiting exercise and they have been absorbed according to reports.

"It is just a matter of time before Marvin and Musamali leave us," a source close to Ingwe said.

The 2021-22 season has been full of ups and downs for the 13 times Kenyan champions. At the beginning of the season, close to 14 first team players decamped Ingwe for other FKF Premier League clubs but a quick fix by Head Coach Patrick Aussems ensured that the team mostly of the Youth team graduates was assembled and registered just in time for League assignments.

Nabwire who suffered a freaking knee injury in 2018 was named captain after Isaac Kipyegon left for Tusker FC on deadline day. Vice captains Benjamin Ochan and Elvis Rupia also left the club after declining to renew their contracts.

Musamali on the other hand rejoined his parent club after a successful loan spell at Nzoia Sugar FC.

Disciplined forces have in the recent past been luring players to sign for them, promising to give them permanent jobs. In 2017, AFC Leopards lost Benard Ongoma to Ulinzi Stars FC and the midfielder has become an important player for the 2010 league champions.

Police FC have been on a spending spree since their promotion to the top flight. A good run in the National Super League ensured that they earned a play-off spot against Vihiga United and they won the two-legged tie to secure Premier League promotion.

The likes of Musa Mohamed, Harun Shakava, Francis Kahata, Duke Abuya, Eric Juma, Elvis Rupia and Job Ochieng are some of the high profile names that have joined Sammy Pamzo Omollo's side.

A 1-1 draw against AFC Leopards on March 20, ensured that they stayed 10th on the log. The two clubs will lock horns again this Sunday April 3 at the Kasarani Stadium and there is a possibility that both Musamali and Marvin might miss the pressure cooker fixture. Midfielder Eugene Mukangula is expected to take over the armband from Nabwire. 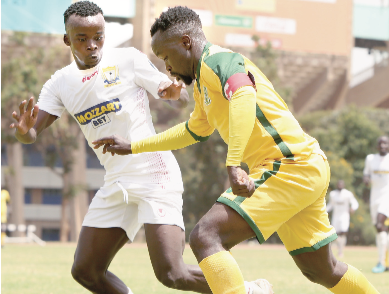 Can AFC succeed where Gor failed?

Joe Kadenge: A Legend was born on this day