Stephen Curry produced a three-point masterclass as the Golden State Warriors thrashed the Brooklyn Nets 117-99 to underscore their championship credentials on Tuesday.

Curry led the scoring with 37 points -- 27 of them from outside the arc -- to give the Warriors an emphatic win on the road over the Nets and former Golden State teammate Kevin Durant.

It was a superb all-round effort from the Warriors, who combined potent offense with a steely defensive display marshalled by Draymond Green.

Andrew Wiggins added 19 points and Jordan Poole 17 for the Warriors, who took the lead late in the first half and never relinquished it.

The Dubs’ defense also had a big night, combining for eight blocks and four steals to keep the Nets offense at bay.

The win cemented Golden State’s lead at the top of the Western Conference with a 12-2 record, and suggested that Steve Kerr’s side are genuine championship contenders once more after missing out on the playoffs for the past two seasons.

“We’re a good team and we’re off to a great start,” Curry said afterwards. “We’re building our identity and our chemistry.

“It’s a great defensive team that can also put the ball in the basket obviously.”

Curry was also pleased with the Warriors’ performance following a 106-102 loss to Charlotte on Sunday.

“This was a nice bounce back game for us,” he said. “It’s great for our young guys to see what it means to bring this type of effort every single night. Coming off a tough loss, how do you bounce back, how do you respond? Tonight we showed it.”

Curry said the Warriors are also playing with a “chip on our shoulder” after difficult campaigns last season and in 2019-2020 hampered by injuries to key personnel as well as the departure of Durant to Brooklyn.

“Coming in healthy this year we wanted to set our own narrative and our own agenda, which was playing Warrior basketball,” he said.

“We have so many talented guys that haven’t even been available yet so it’s going to be a great year for us to keep building.

“We have that chip on our shoulder -- come out every single night because we have championship DNA but it’s been two years since we’ve been able to prove it.”

Brooklyn head coach Steve Nash meanwhile believes his team still have work to do if they are to challenge for an NBA title this season.

The Nets have been beaten by a slew of heavyweight opponents this year, with Tuesday’s loss following defeats to Milwaukee, Chicago and Miami.

“I just don’t think we’re in that category yet, we got a lot of work to do,” Nash said.

“We’re trying to improve as a group, get better. Hopefully we can find a way to overcome some of our deficiencies by the end of the year. I think the guys have been great as far as buying in to what we want to do defensively.

“I think tonight it was a great lesson for us that we got to double down on some of our principles when the going gets tough.” 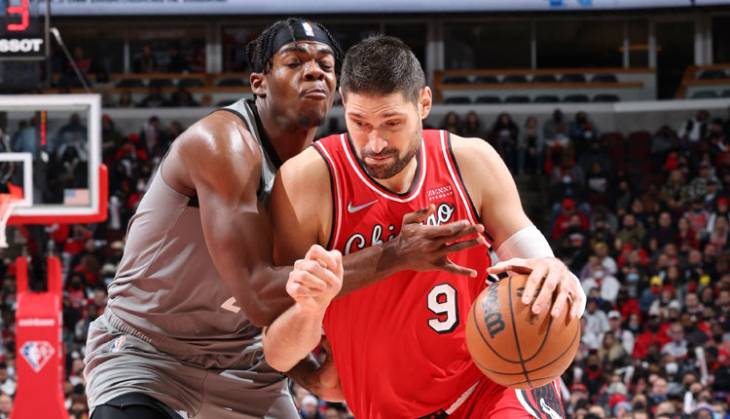