Having the physical tools is one thing, but to go where no woman has gone before – and set a world record – you need a whole lot of determination to go with it.

That’s an area in which Peres Jepchirchir has never been lacking.

Her courage, class and composure were all on full display on Saturday as the 27-year-old claimed her second global title at the World Athletics Half Marathon Championships Gdynia 2020, her time of 1:05:16 in cold, windy conditions a world record (pending ratification) in a women-only race.

It came as no surprise to those watching. Jepchirchir, after all, had run 1:05:34 in Prague last month in what was a largely solo run and for her manager, Gianni Demadonna, the photos from that race were a window into her mindset.

“She was alone in front, but you could see the determination in her face,” he says. “She’s not only really motivated, but she has a tough mind.”

It was February 2014 when he first came across it, and it left a lasting impression.

Virtually no one knew who Jepchirchir was when she appeared at the front in the Kenyan Cross Country Championships, surging clear of reigning world cross country champion Emily Chebet and 1500m star Faith Kipyegon, who eventually outkicked 20-year-old Jepchirchir for the win.“She ran an amazing race for a girl nobody knows,” says Demadonna.

“She was caught in the last 500, 600 but I said, ‘this is amazing – a good talent not only in the legs, but in the brain, if you are so motivated to run without fear out front.’

I signed her immediately after that.”Jepchirchir had run one low-level marathon before that, clocking 2:47:33 at altitude in Kenya, but until that point no one had ever witnessed her world-class potential.

She grew up in Kericho in western Kenya and her family were farmers, growing tea and maize.

Jepchirchir ran to school throughout her   childhood, a commute she estimates was between three and five kilometres, and she started running competitively in primary school after a gentle push from her brother.

“He said, ‘you are capable as a runner’,” says Jepchirchir. “He motivated me.

”Her coach for many years as a senior was Gabriela Nicola, but after he relocated back home to Italy the remote coaching arrangement via phone calls, WhatsApp and emails soon became difficult and she later decided to steer her own path.

In 2016 she lowered her half marathon best to 1:06:39 and announced herself on the global stage with victory at the World Half Marathon Championships in Cardiff.

She reached an even higher level in 2017, breaking the half marathon world record in Ras Al Khaimah in the United Arab Emirates, clocking 1:05:06 to beat Mary Keitany by seven seconds.

What made that run all the more astonishing was that Jepchirchir was a few weeks pregnant at the time, and she gave birth to her daughter, Natalia, in October 2017.

She was patient on the comeback, as is the custom with Kenyan athletes, slowly nursing her body back to fitness.

“It was difficult, I had to lose weight (after pregnancy),” says Jepchirchir. “But Natalia was a blessing from God.”

Thirteen months after giving birth, Jepchirchir returned to racing with another low-key marathon in Kenya, clocking 2:46:15, and she ran her first high-level marathon in Saitama, Japan last December, winning in 2:23:50, a PB and just 32 seconds shy of the course record.

Jepchirchir trains in Kapsabet alongside a pacemaker and with her husband, Davis Ngeno, who was once a competitive runner.

When the lockdown restrictions took hold in the spring and Kenyans were warned not to train with more than two other athletes, Jepchirchir’s close-knit setup remained much the same, although without access to tracks her focus was on doing fartleks and long runs over the rolling hills around Kapsabet.

“This pandemic was difficult and it affected a lot of people,” she says. “I used this time to train, I didn’t stop because I was trying to reach my shape.”

Her big target was the Boston Marathon in April, but when that was first postponed, then outright cancelled, she began to focus her sights on the World Half Marathon Championships.

Despite the cold weather and sea breeze blowing in from the Baltic on Saturday, she spoke in confident terms about a fast time and even told her manager before the race she was “in as good shape, if not better” than she was in Prague last month.

After a strong early pace – 5km was reached in 15:20, 10km in 30:47 – Jepchirchir knew she was on for a fast time, but the chief thing on her mind was bringing the gold medal back to Kenya. - World Athletics 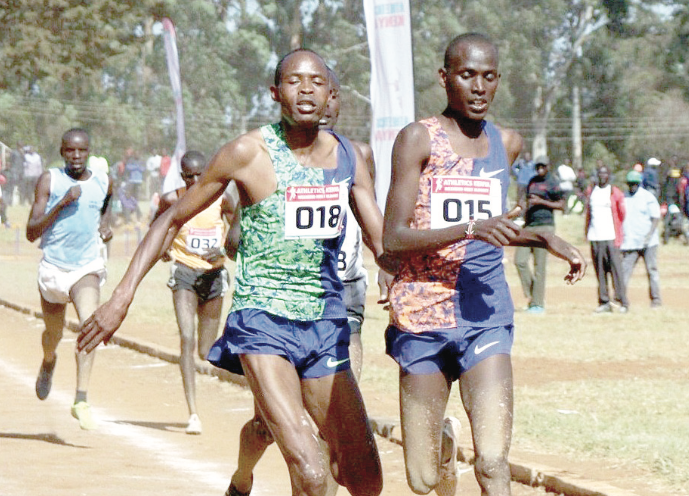