Kenya on Saturday successfully held the finals of the World Athletics Continental Tour, one of the first major sporting events in Africa since  the outbreak of the coronavirus pandemic.

The Nairobi event dubbed Kip Keino Classic in honour of legendary athlete Kipchoge Keino, was the seventh and final stop of the series which began in Turku, Finland, on August 11, after three other planned events were cancelled due to the pandemic.

The conclusion of the tour on a high puts Kenya in strong contention to host the next two consecutive tours in 2021 and 2022.

Locally, the historic event handed the newly refurbished Nyayo National Stadium  an opportunity to host a major sporting event for the first time in three years. The facility was closed three years ago for renovations.

The one day meet was classified into three categories: core, discretionary and national.

The core events were those removed from the 2020 Diamond League circuit: steeplechase, 200m, triple jump and discuss.

Reigning world champions Beatrice Chepkoech (3,000m steeplechase), Hellen Obiri (5,000m) and Timothy Cheruiyot (1,500m) particularly lit up the stadium that was 20 percent full, a preventative measure by the government to adhere to the social distancing rules.

Chepkoech delivers in steeplechase The women’s 3,000m  steeplechase was the show stopper of the tour where the world record holder clocked 9:29.05 to edge the 2015 world champion Hyvin Kiyeng who settled for the second spot in 9:34.07.

The two best athletes in the event at the moment were meeting again barely two weeks after facing off at the  Doha Diamond League where Chepkoech had finished second while Kiyeng was fourth in the 3000m race won by world 5,000m champion Hellen Obiri.

Chepkoech and Kiyeng had also met at the ISTAF Berlin Continental Tour meet where Kiyeng shocked Chepkoech for a win.

The men’s race was won by Abraham Kibiwott who stunned favourite Leonard Bett,  the world Under-18 Champion, in an event that  Olympic and world champion Conseslus Kipruto gave a wide berth.

The two time world champion dropped out of the 1,500m at the Doha Diamond league last week in his  first race in  over seven weeks after testing for coronavirus.

The world champion continued her dominance to close the pandemic-ravaged season on a high.

She had to shrug off stiff competition from compatriot Agnes Tirop in a hugely entertaining race.

Ethiopia’s Tsigie Gebreselema came out fourth in 15:13.38 with Joyce Chepkemoi clocking 15:19.79 for a fifth place.

“This has been a strange season because of  Covid-19 and having a race of this magnitude at home is something that we should celebrate.

It has been  challenging and as I close the season at home I am looking forward to the new season,” observed Obiri.

“Today I was not 100 percent fit, but I wanted to give my fans something to smile about.

I am happy with today’s win. It is now time to relax and focus on the coming season where my main target is the Olympic Games in Tokyo,” said Cheruiyot who was pleased to have some races in a coronavirus-ravaged season.In the corresponding women’s race, continental cup winner Winny Chebet lost to Ethiopia’s Halu Lemlem.

World bronze medalist Ferguson Rotich put a spirited performance to win the men’s 800m in a time of  1:44.78 ahead of Joseph Deng of Australia (1:45.21) and Commonwealth Games champion Wycliffe Kinyamal (1:45.52) who finished second and third respectively.

Fast rising Nicholas Kimeli claimed a hard-fought victory in the men’s 5,000m in a new stadium meet record of 13:08.32.

He had to dig deeper to beat  Ethiopia’s Teklehaimanot Berihu who pushed him in the final 200m.

The Ethiopian clocked 13:08.91 while Africa junior champion Jacob Krop settled for the third spot in 13:11.88.

“It was a perfect race for me because I am looking forward to the Tokyo Olympics which is my main target.

I want to assure Kenyans that I am going to fight hard to bring back the gold medal that has eluded us for long,” said Kimeli.

In the women’s 200m, Britain’s Kristal Awuah had the standout performance by the over 90 foreign athletes who graced the tour after she set a new stadium record of  23.05  to win the race ahead of Hemida Bassant of Egypt (23.13) and Rodah Njobvu of Zambia (23.18) who finished second and third respectively.

Kenya’s Jared Momanyi crossed the finish line first in 46.12 with Emmanuel Ojeli of Nigeria finishing second in 46.49 as another Kenyan Ryan William placed third in 46.66.

National champion Alphas Kishoyian finished a disappointing sixth in a time of 47:12.

In the women’s race, Betarice Masilingi shocked national champion Mary Moraa to win in a time of  50.99 as Moraa came home second in 51.99 while Leni Shida of Uganda clocked 52.77 to finish third.

In the absence of former world champion Julius Yego who pulled out of the meet, Kiprotich dominated the event managing a throw of 76.71m followed by Hubert Chmielak of Poland (75.47m) while Timothy Herman of Belarus came home third with a throw of 75.18m.

“I was not going to let down my compatriots at home and that is why I had set my target to win this race.

Kiprotich now hopes he can keep in shape and replicate the newfound momentum to the Olympic Games set for Tokyo Japan next year.

Sawe had minimal competition on the day managing a high of 2.20m,  in second position was Asbel Kemboi (2.05m) and Kiprono Robert (2.00m).

The African Games silver medalist now shifts his attention to next year’s Olympics. 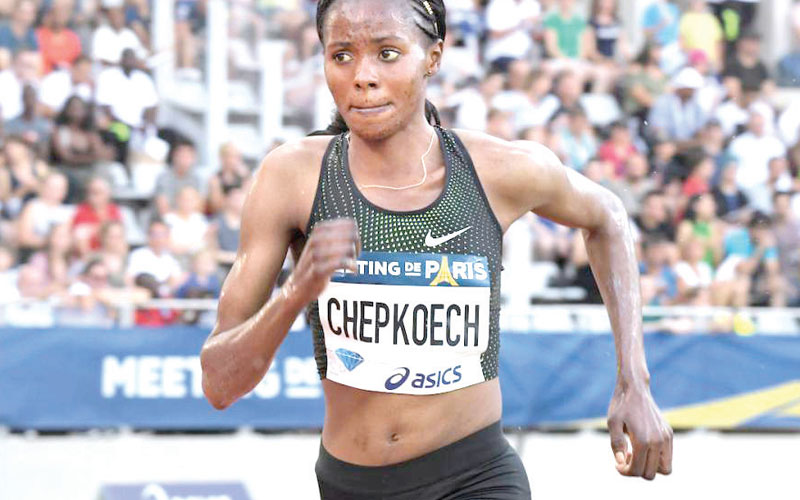