Kericho Golf Club’s Tobias Messo emerged the 2021 NCBA Golf Series champion after he carded a round of 45 points on Friday, at the Karen Country Club.

Playing off handicap 30, Tobias carded 21 points on the fi nine to combine with 24 points on the second nine for a total of 45 – two points better than his near- est challenger.

Tobias, who came into the event on the back of an overall win in the Kericho Golf Club leg of the Series, became the inaugural champion of the Series, which featured 23 golf events played across the calendar.

He fended off the chal- lenge of golfer Winston Kimani - playing off handi- cap 15 - from Thika Golf Club, who ended the round with a haul of 43 points to claim the men’s winner position.

Kimani qualify to play in the grand final, having as men’s runner-up at the Thika Golf Club leg of the Series in January.

Claiming the men’s runner-up spot was another junior, twelve-year-old Nathan Mwangi from Karen Country Club, who the day with 42 points to take the podium place in the category.

Nathan qualified to play in the grand fi for his overall win of the Karen leg of the series becoming one of three juniors who achieved the feat.

Karen’s Akinyi Gitonga claimed the top bragging rights among the ladies, having carded a round of 37 points, one more than Mariah Muthee, who
claimed the runner-up spot with 36 points.

Akinyi re- peated the feat, which won her a qualifying spot into the grand fi at the Karen leg of the Series, where she also emerged lady winner.

Speaking at the event, NCBA Group Managing Director John Gachora said: “We have had 22 tournaments so far, and with close to 3,000 golfers taking part, so we could not have asked for more. 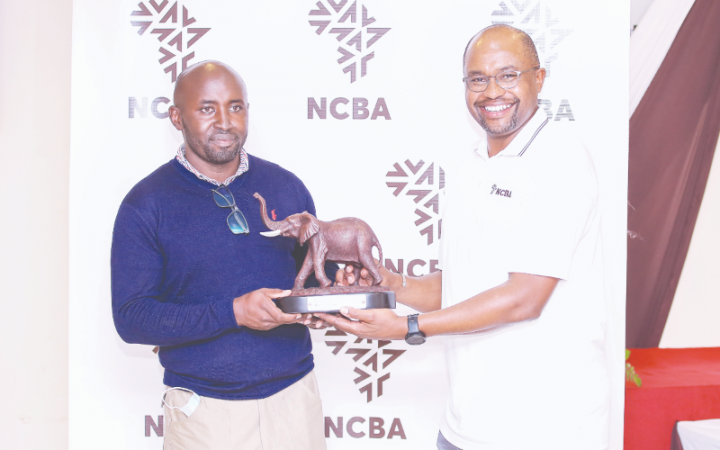