The fact that talks in some local FM stations are hosted by hare-brained presenters is not something to belabour.

But you would think some misinformed show hosts could just keep to their normal lane of vulgarities and not purport to offer their two cents worth of advice on national policy issues.

I was piqued one morning last week when a couple of notorious, albeit popular presenters, those your mama warned you against listening to for the sake of your sanity, held a fleeting discussion on the ongoing Competency-Based Curriculum (CBC) focusing on recommendations that early childhood education should include a vernacular language component.

In his usual lewd tone, the presenter derided the fact that mother tongue is an essential part of early childhood development.

He lost the fact that even those foreign languages he so loftily hailed as humankind’s best lingua franca, are other people’s vernacular.

He raved on how schools would employ oldies to teach vernacular, oblivious to the fact that today there are a myriad vernacular radio and television broadcast stations staffed by qualified journalists who are much younger than he is.

With this kind of ignorant and reckless talk, I shudder to think the kind of self-identity his children are growing up with.

My children are not fluent in their vernacular either, but it is my bad. Still, they struggle positively and have some functional literacy in the language.

As a proponent of the revival of mother tongues to help in instilling cultural identity and esteem in Africa’s youth, and a vernacular author to boot, I felt this kind of talk was way off the presenter’s league. He should just stick to his stock-in-trade of spewing obscenities to gullible audiences.

I hope that our policy makers do not pick such vibes as a barometer of the country’s socio-economic and political environment.

These kind of FM stations have already messed up our youth and need to be reined in through enforcing the media code of ethics in Kenya.

Meanwhile, I am sure this clown is over the moon following news last week that health experts had appealed for the introduction of sex education at an early age in schools.

Of course, his brand of journalism thrives on matters below the belt. So he should let those paid to think for us intelligently to do so without contamination.

A trending undated video on social media last week revealed what is so wrong with our confused justice system.

And I believe this is not just in Kenya. Some two children, a boy and his sister, violently resisted a court order that directed them to go back to their mother in a parental conflict involving their custody.

While we understand that the law automatically gives the custody of underage children to the mother, particularly the girl child, this was a clear case of an exemption to the rule.

The public cries and protests of those two hapless children was not in vain. Although justice is depicted as being naked to symbolise its impartiality, it should not be that insensitive.

Did the magistrate hear their story?  Clearly, if the children’s reaction was considered, it seemed one of the few cases of mothers from hell.

Moreover, it perpetuates the now accepted stereotype that all men are monsters who cannot be trusted even with their own children.

It was lazy of the presiding magistrate to ignore the children’s desperate plea for help.

If any harm comes to them from their mother, which is a likelihood as we well know today with mental health issues, the magistrate should be held solely responsible for abdicating his responsibility of protecting the vulnerable souls amid glaring peril.  — The writer comments on international affairs

How young is too young for make-up

Dying in pursuit of decent livelihood… 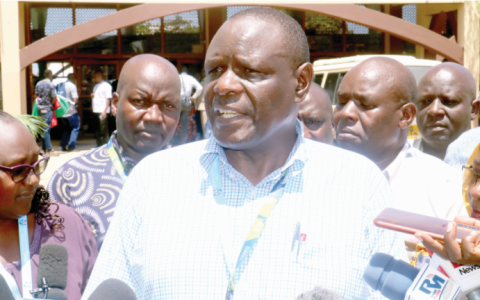 Confusion over placement of learners in Junior Secondary School

High school teachers to be trained on Competency-Based Curriculum system

Parents should play their roles in Competency-Based Curriculum