The owner of Benco Investment Limited, a tissue-paper making factory based in Thika, was on Wednesday charged at a Thika court with discharging raw sewage to the environment putting the lives of River Chania water consumers at the risk of contracting water borne diseases.

Lin Xian Hua was arrested on Tuesday evening in a sting operation conducted by a Kiambu multi-agency team that launched a crackdown on factories operating along the river and which are suspected to have been polluting the river through direct emission of raw sewage to the environment.

Kiambu County Commissioner Wilson Wanyanga, Kiambu County Health department and police officers led officers to the factory that is suspected to have been releasing untreated wastes to Chania river resulting to death of aquatic animals.

Appearing before resident magistrate V.A Ogutu, Xian denied the charges and was released on a bond of Sh 500,000 or a cash bail alternative of Sh 100,000. He was also ordered to deposit his passports to court and provide two Kenyan contact persons.

The case will be mentioned on 18thSeptember this year. The Chinese national-owned factory was closed down during the operation after it was established that it lacks a sewerage piping and also has no capacity to recycle the used water in order to release clean water into the environment.

During the raid, Kiambu county health department also collected samples of the toxic effluents for testing in their labs to ascertain the chemicals used by the remotely located factory.

According to Wanyanga, the team will be undertaking inspections on illegal discharge of raw sewage into the environment on a regular basis.

Early last month, a dead hippo and hundreds of lifeless fish and frogs lay on Chania river’s banks, with residents attributing the rare occurrence to toxic effluents from the many industries in the town. 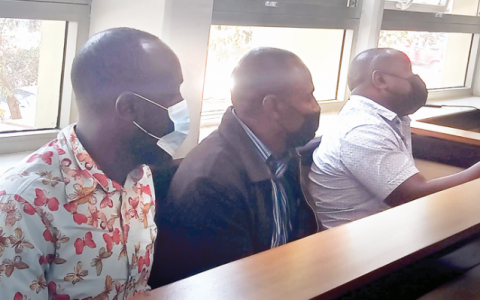