The government has set aside Sh8 billion to construct at least 11,600 classrooms to expand learning institutions to accommodate Competency-Based Curriculum (CBC) cohort.

Education Cabinet Secretary Prof George Magoha said yesterday that the project would be completed by April so that learners currently in Grade 5 will have a smooth transition to Junior Secondary at the beginning of January 2023.

“Our goal is to deliver this project by April. The government will provide the money.

All we want you to do is to identify a contractor from the locals and build the classrooms by April,” said Magoha.

President Uhuru Kenyatta had said that the classrooms, each expected to cost about Sh810,000, should be constructed by contractors based near the schools, and the money will be “remitted directly to the contractors in their respective sub-counties.

Yesterday while meeting the Regional Commissioners, County Commissioners, and the Ministry of Education Regional and County Education officials, Prof Magoha warned that the funds availed for the completion of the project (CBC classroom expansion) will not be misappropriated.

According to Magoha, the money will be paid directly to the contractors electronically and warned that any government official who will create unnecessary obstacles to the project will be dealt with.

He asked the government officials under the Ministry of Interior and National Coordination to help supervise the work and ensure the project succeeds within the stipulated time.

“We are doing this for the sake of our children. CBC must succeed. Let us not catch you waiting for facilitation for you to supervise the work,” warned Magoha.

At the same time, Interior Cabinet Secretary Dr Fred Matiang’i also cautioned the government officials against laxity, and directed Regional Commissioners to sack any chief who does not perform his or her work diligently.

“Sack a chief who is playing with this project. I know you will require additional support to move around.

We will work on that but first treat this as a normal operation. CBC infrastructure expansion will and must succeed,” he said.

Matiang’i said that the President has a personal interest and he wants the project to succeed before he leaves office in August.

The Interior CS told the Regional Commissioners and County Commissioners that for the government to succeed in the project, they must push the teams at sub- county level to get down to work.

“This project requires early preparations because it is bigger than the desk project. For us to succeed, you will have to push so hard for the teams at the sub-county.

When you get back to your stations, rally your troops, get sub county teams immediately.

We are the circular ourselves, don’t wait for any other circular, do early preparations,” said Matiang’i.

Matiang’i said that unlike in the past where there were so many delays in making payments to the service providers, this time round the money would be wired directly to the contractor.

“We had so many delays in making payments last time. We are not going to pay any other way apart from electronically.

We do not want to frustrate anybody because we want this project to succeed. The money will be wired to the contractors directly,” said Matiang’i.

President Kenyatta had on Mashujaa Day celebrations directed the National Treasury to make available Sh8.1 billion for the project to support the primary to secondary school shift in the Competence-Based Curriculum (CBC).

“Ministry of Education, jointly with Ministry of Interior and the National Treasury, shall establish a framework for the construction of  nore than10,000 classrooms needed to provide the additional learning space required for the one million new students set to join junior secondary,” said President Kenyatta.

Even with the additional classrooms, the country will still be staring at a huge shortfall of space to accommodate the learners.

CBC report identified schools that will have the biggest enrolment burden during 2023 transition from primary to secondary schools. 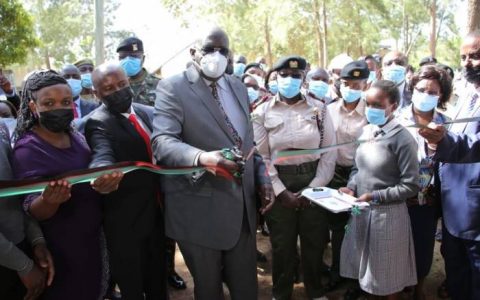