Uhuru made the announcement during a press briefing in State House.

"Fellow Kenyans; IT IS my sorrowful duty to announce to the Nation the passing on of H.E. Emilio Mwai Kibaki, the Third President of the Republic of Kenya. H.E. Mwai Kibaki lived a dedicated life of public service. We salute a notable father figure in the chronicles of our Nation. A leader who strove so hard and accomplished so much for his country. A Nation he so deeply cherished and served with commitment and an unbending will to improve the lives of our people," Uhuru's statement read in part.

In his long address, President Uhuru Kenyatta stated that Kenyans rejoice in the lifelong companionship that the departed ex-President enjoyed with his now-departed wife, Her Excellency Lucy Kibaki, and his extended family.

"Our sincere sympathy to his Children – Judy Wanjiku, Jimmy Kibaki, David Kagai and Tony Githinji, and their families and for all who mourn his passing. As the late Former President served Kenya, Africa, and the World, he remained a deeply devoted family man, an avid golfer, and an earnest friend to many," Uhuru's statement read further.

The Head of State further ordered and directed that in the testimony of Kibaki, the nation will observe a period of national mourning from today to the sunset of the day of his interment. Uhuru also directed that his predecessor be accorded a state funeral, with full military honour and protocols being rendered and observed. 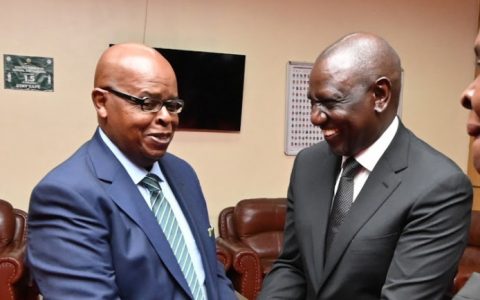 Kibaki helped me, Uhuru out of ICC cases – Ruto

The presidential flag: How Kibaki’s was different from Kenyatta’s, Moi’s and Uhuru’s