She is the first woman to serve as the Secretary-General at the United Nations Conference on Trade and Development (UNCTAD) after she officially took over the position on Tuesday, September 14.

Rebeca Grynspan is a Costa Rican economist and she was nominated for the position that has been vacant since February 2021 by United Nations (UN) Secretary-General, Antonio Guterres.

She took over from Mukhisa Kituyi who resigned from her job in February 2021 in order to pursue presidential dreams.

Grynspan is known to be a woman of means and her career has been so excellent seeing her climb the ladder too fast.

Before her appointment, she also served as the first woman at the Ibero American secretary General.

She is also a former Secretary-General of the UN and associate administrator of the UN Development Programme (UNDP), and a former regional director for Latin America and the Caribbean for the organization.

In June, the UN General Assembly approved her appointment making her the first-ever to serve in the position.

“I am honoured to begin work at UNCTAD at a critical time for our world. Covid-19 has exposed the widespread inequalities and vulnerabilities of the world and the development model. As we recover from the pandemic, we have an opportunity to rebalance the global economy and ensure shared prosperity,” the newly appointed who takes over office this week said.

According to her, it was very important that everyone takes action with the aim of transforming trade and reshaping our global economy to overcome barriers and make it to greater heights.

Kituyi resigned from the job and announced that he will be running for presidency in 2022. He served in the position since September 2013 before he was re-elected in 2017 for another four-year term.

Mukhisa Kituyi roots for Luhya unity ahead of 2022 elections

Kituyi: I will not drop my presidential bid in favour of anyone 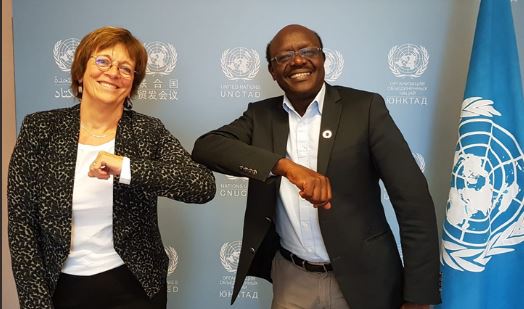