Kisumu is the historical hub of East African co-operation and the intellectual incubator of some of the leading ideas behind Kenya’s liberation movement.

The national motto of “Harambee”, introduced as a political rallying-call in Kisumu city during the 1950s.

Led by Jaramogi Oginga Odinga, Kisumu was the epicenter of the push to release Mzee Jomo Kenyatta and the “Kapenguria Six” from their illegal detention. During the detention, union leaders from Luo Nyanza stepped into the gap to ensure that the liberation momentum was not lost.

DOCTRINES OF OUR FOUNDING FATHERS

The Doctrines of our Founding Fathers:

A progressive nation is one that is in continuous conversation with itself. This is because nationhood is a negotiated process that needs constant alignments and adjustments in the pursuit of perfection.

Self-rule is not an end in itself; it is a means to a greater end. But for freedom and human rights to be realized, the paradox of choices must be resolved.

Self-rule is the granting of opportunities, accompanied by the burden of choice. Every opportunity in the exercise of freedoms and self-rule, must be tempered by the consequences of choice.

Under the 2010 Constitution, the fields of individual freedoms have expanded and citizen participation has become emboldened.

Our Founding Fathers urged the liberated patriots to shift from the status of being subjects to that of citizens when their fields of freedom were expanded.

The framers of the 2010 Constitution did not envisage a situation where the expanded fields of rights result in diminished responsibility by citizens and institutions. They saw a balance between freedoms and choice and the consequences of choice.

The balance between freedoms and the consequences of choice has been challenged by the growth of our independent institutions. Their growth has stretched our democratic boundaries to the limit; but it has not cracked them. It has bent the will of the people; but it has not broken it.

From nullification of a presidential election in 2017 to an attempt to stop the will of the people as expressed through BBI, the Judiciary has tested our constitutional limits, but not broken them.

We must follow the Rule of Law and obey the decisions of the courts but the sovereign and supreme voice of the People of Kenya must also be followed. And that is why our National Conversation today must focus on the Burden of Choice.

Citizens are required to exercise their will and shoulder the burden of their choices, and so should our independent institutions. The field of independence has been expanded in the Judiciary, and so the field of their responsibility should respond to the summons of nationhood. Their decisions should also be accompanied by a burden of choice. This is what the national conversation should ponder.

When the Presidential election was nullified in 2017, we lost 1 Trillion Shillings as an economy in only 123 days. We were losing 1 billion shillings every working hour for the 123 days we held the 2017 election. The citizens will have the burden of losing 30% of our national budget every five years due to the toxic politics.

If the decision to stop BBI had been subjected to a cost benefit analysis, in other words if it had considered the burden of choice: If we are in a constitutional moment, is a decision against BBI a decision in support of status quo?

Economic acceleration is about increasing the speed of achieving our national goals at the national, county, and individual levels:

At the National Level:

After 74 years of colonial occupation, the Colonizers left us with a Gross Domestic Product (GDP) of approximately Ksh 6.4 billion in 1963.

Post-independence, within a period of 50 years, the combined administrations of Mzee Kenyatta, Mzee Moi, and Mzee Kibaki increased GDP by Ksh 4.5 Trillion.

President Uhuru’s administration, in only 8 years, has doubled what the colonizers and the first three administrations did in 128 years. GDP is now at Ksh 10.3 Trillion.

At the County Level:

In 7 years, Ksh 2.3 Trillion devolved to counties, this is equivalent to about 16% of current GDP. This is also equivalent to the GDP between 1885 when the colonizers came to Kenya and when President Moi retired in 2002.

The BBI dream, proposes to raise minimum revenue allocation to 35%, sending even more resources to the counties to catalyze their accelerated development.

At the Individual Level:

20% of the titles issued are in the Nyanza Region, and most of are in Kisumu County.

The title deed is what our Founding Fathers fought for when they made land ownership a central plank of our independence struggle. And by accelerating land adjudication and settlement, the President’s intention is to give security of tenure to as many Kenyans as possible.

The Big Push Investments are about laying the ground for our economic take-off.

The brick-and-mortar investments of roads, rail and ports are not the dream. The dream is what these “Big Push Investments” will do for Kenya; and how they will transform Kenya’s standing in the society of nations.

Lamu Port. Lamu Port is the first Port built in Kenya since the Port of Mombasa in 1896. Kenya is the first country in 115 years to build a deep-sea port on the East African Coast of the Indian Ocean. It took 49 years to conceptualize Lamu port; but it took just 8 years to make it a reality. Once the port is operational, Kenya will be able to handle ships the size of those that transit through the Suez Canal. This capacity will not only increase Kenya’s transshipment business, but will also impact on the over 130 million residents of the Eastern African region.

Revival of Dead Capital. The revival of dead capital is fulfill the instructions of our Founding Fathers to take care of what they had built.

The revived 200-Kilometer Nairobi-Nanyuki railway has now become one of the most popular train routes in Kenya. Every trip, the train transports 1,600 passengers, which is the equivalent of a convoy of 120 matatus. And the cost per passenger is only Ksh.200 compared to Ksh. 500 by Matatu. The passengers on the train make a 60% saving using the revived train system; all while travelling at greater comfort and safety.

Revival of the Port of Kisumu and the reconditioning of the MV Uhuru vessel. The economics of the decision to revive MV Uhuru:

Speed. To transport fuel by road from Kisumu to Uganda takes 72 hours because of the long queues at the Malaba border. But to transport fuel from the Port of Kisumu to Port Bell in Uganda by ship takes only 12 hours. This means that by the time a tanker makes one trip to Uganda by road, the MV Uhuru Ship will have made six trips.

Volume. One tanker carries 20,000 litres of fuel; but one wagon aboard MV Uhuru carries 60,000 litres. If the ship accommodates 22 wagons, each voyage it makes to Port Bell is an equivalent of a convoy of 66 tankers headed to Uganda.

Liberation from the ‘poverty of dignity’ was a central motif of our independence struggle. Our Founding Fathers taught us that self-rule will not be fully attained until self-worth is restored.

In our Constitution, the restoration of dignity is a continuous process rather than a one-off activity. The question this Madaraka Day is how well we have rendered this aspect of our freedom.

Restoration of Dignity in Maternal Healthcare. A clinic in mukuru slums was serving 500,000 residents. A delivering mother at the clinic would only be allowed to stay for one hour of post-natal care before she was asked to leave to make way for the next patient. President’s Uhuru’s administration fixed this indignity by building 25 hospitals in informal settlements in just 100 days.

In one month, a dialysis patient who needs 10 dialysis sessions spends between Kshs. 9000-16000 shillings per session. With NHIF, the sessions are free and patients end up saving Kshs. 80,000-160,000 every month. This is possible with the standard NHIF card for health services which is Ksh 500 a month.

Kenyans must endeavour to pursue political stabilization by any means necessary. This is because political stability is the life-blood of our Republic. What we have built for 58 years, can be destroyed in one day of political instability.

We cannot engage in political stabilization if we live in political denial. For Instance: Everyone knows that BBI is good for the country even those who are unhappy with it but Kenyans have embraced fear of change instead of continually striving for a more fair, just, peaceful, cohesive, and democratic Kenya. Those opposing BBI oppose it, not because of its substance, but because they cannot dare to imagine a better Kenya for all.

If the political elite remains short-termist and self-serving, the consequences of our choices will become a permanent burden on our people.

The political class is invited to upgrade their status from being politicians to being leaders. Politicians are obsessed with personal gain, but our national pain disturbs leaders. 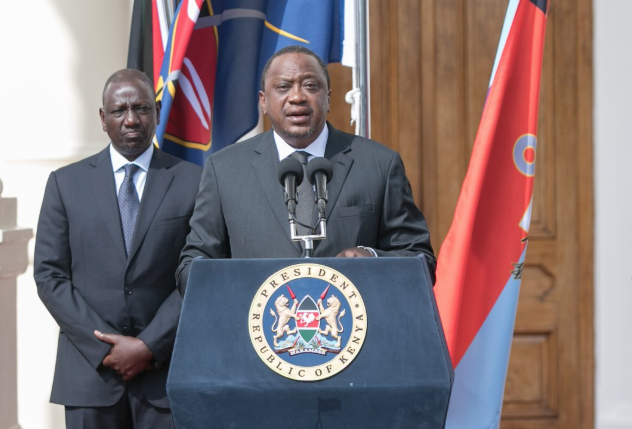