We’re not ready for any deals with rivals, OKA maintains

One Kenya Alliance (OKA) testerday denied allegations that it was being ‘hunted’ by other political alliances ahead of next year’s General Election.

The Alliance term ed as far-fetched media reports that it was keen to work with either ODM leader Raila Odinga or Deputy President William Ruto.

There have been reports that Raila and Ruto were keen to woo the four principals of OKA to form a formidable team for the elections.

But speaking at St Mark's AIPCA during a church service in Kinamba Naivasha, Nakuru county yesterday, OKA principals: Musalia Mudavadi (Amani National Congress), Wiper’s Kalonzo Musyoka,
Moses Wetangula (Ford Kenya) and Gideon Moi (Kanu) maintained that they were united and ready to support one of their own in the elections.

Kalonzo said that they had not been approached by any leaders as alleged.
He accused some media houses of being used by politicians to peddle lies and weaken the alliance, which is yet to name its presidential flag bearer

“No one is hunting us so that we can join them, but the truth is that we are the ones who want them to join us,” he said.

Kalonzo at the same time questioned a recent opinion poll results that placed Ruto and Raila as the leading contenders, terming them as questionable.

“These polls are sponsored by the same politicians who want to lie to the country that they are leading,” he said.

The former vice president observed that if elected to power, OKA would ensure education is free from nursery to university.

“The ongoing politicking is worrying and is causing panic, am on
investors,” he said.

In a veiled attack targeted at ODM Raila Odinga chief and Deputy President William Ruto, Mudavadi urged Kenyans not to allow ills that were perpetuated by white colonialists to creep back through the black colonialists, presenting themselves as saviours.

“Our freedom fighters fought hard to free us from the colonialists’chains of slavery, poverty, lies, corruption, intimidation and many more ills. We should not accept to be taken back to the same chains by black colonialists, presenting themselves as saints, promising to revive an economy they have looted to the core,” he said.

Mudavadi called on Kenyans not to be hoodwinked by politics of lies and intimidation and instead be steadfast in calling leaders to account and elect men and women of integrity.

“I urge Kenyans of goodwill not to accept politics of lies and intimidation. I seek your support and together, we shall end corruption, build a vibrant economy, create jobs and put a smile on every Kenyan face,” the former Deputy Prime Minister said.

Mudavadi noted that reviving the economy will be achieved through creation of job opportunities and lowering the high taxes.

On his part, Kalonzo urged the church to be open to politics and work together for a prosperous and peaceful country.

He argued that politicians should not be frowned at in church platforms for they have a shared mission as long as both play their part respectfully meant to instil ideals of a great country. “OKA leaders are an open page.

We come to church to worship and interact with fellow
Kenyans, talk matters of building our country positively and not spew hate. That is our civic duty and together with the church, we should be a
one thing,” he said.

Kanu chairman Gideon Moi called on Kenyan s to be wary of leaders who are not genuine. Without naming names, he termed as questionable the behaviour and conduct of some of those seeking the top seat.

“You should ask yourself if the person seeking the presidency is trustworthy or if he can be trusted with your future,” he said.

Gideon called on the church to continue prayin g for the nation, adding that as OKA, they were united and ready to support one of their own.

His sentiments were echoed by Ford- Kenya leader Moses Wetangula, who said that they would backbone of the principals for the top seat.

“As One Kenya Alliance, we are united and shall walk as one team to the Gen- eral Election as we believe that we are the solution to the challenges facing Kenyans,” he said.

Mudavadi told the worshippers to ignore leaders who peddle hate speech and incitement in their campaigns.

“Next year is critical for the country. Every electorate should vote to fight graft, ethnicity, poverty and terrorism ,” he said. 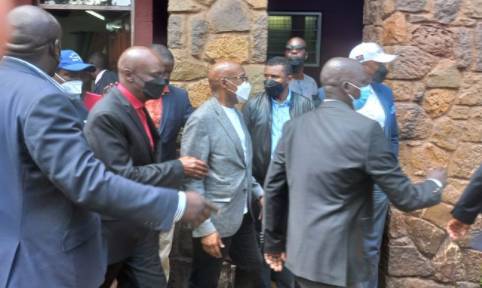 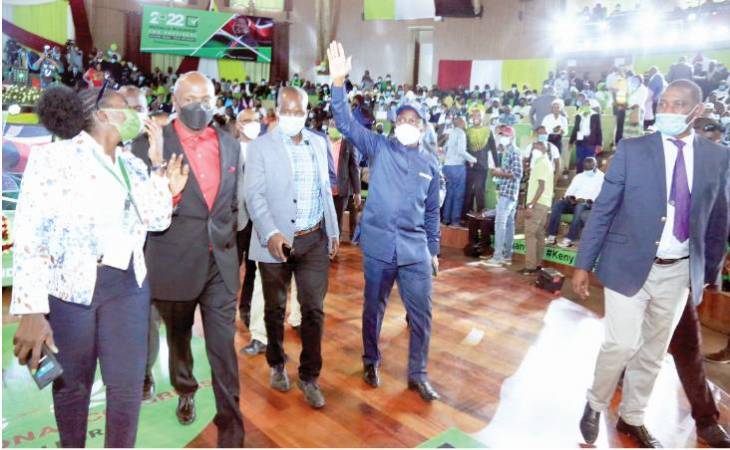