Christian Eriksen has released his first public statement since suffering a cardiac arrest during Denmark’s Euro 2020 game with Finland, insisting he ‘feels better’ and ‘won’t give up’.

The former Tottenham midfielder, who now plays for Inter Milan, required 13 minutes of CPR after collapsing just before half-time but was taken to hospital in a stable condition, where he remains.

Eriksen thanked fans for their support and concern, and vowed to get to the bottom of why he experienced such a sudden and serious health emergency in a short statement released to Italian newspaper Gazzetta dello Sport via his agent.

The 29-year-old’s statement was released on the morning that his team-mates spoke for the first time since the shocking incident in Copenhagen on Saturday.

‘We were about to lose a friend and a team-mate’.

Eriksen’s statement this morning read: ‘Thank you, I won’t give up. I feel better now - but I want to understand what’s happened.

‘I want to say thank you all for what you did for me.’

Eriksen has been in contact with both his Danish and Inter Milan team-mates on FaceTime calls and has been said to be joking: ‘I think you’re feeling worse than I am!’

The former Spurs midfielder also suggested he would be ‘ready to train’ now, just two days on from his collapse.

Eriksen remains in hospital in Copenhagen with his wife Sabrina and parents, father Thomas and mother Dorthe at his bedside.

Meanwhile, Denmark’s goalkeeper Kasper Schmeichel and striker Martin Braithwaite on Monday lamented that they had to choose whether to restart the Denmark-Finland Euro 2020 match while they were reeling from Christian Eriksen’s mid-game collapse.

“We were put in a position, that I personally feel that we shouldn’t have been put in,” Schmeichel told Danish media at a press event in Helsingor north of Copenhagen.

“We had two options,” Schmeichel explained. “Either come back the day after (Sunday) at noon or continue the game.”

The Leicester City goalkeeper said he wished someone more senior would’ve said “that it wasn’t the time to take that decision, and that we should maybe wait until the day after to decide”.

“What has happened has happened, and hopefully they’ll learn from this,” Schmeichel said, as he praised what he considered the real “heroes” of the game, the medics. - Daily Mail 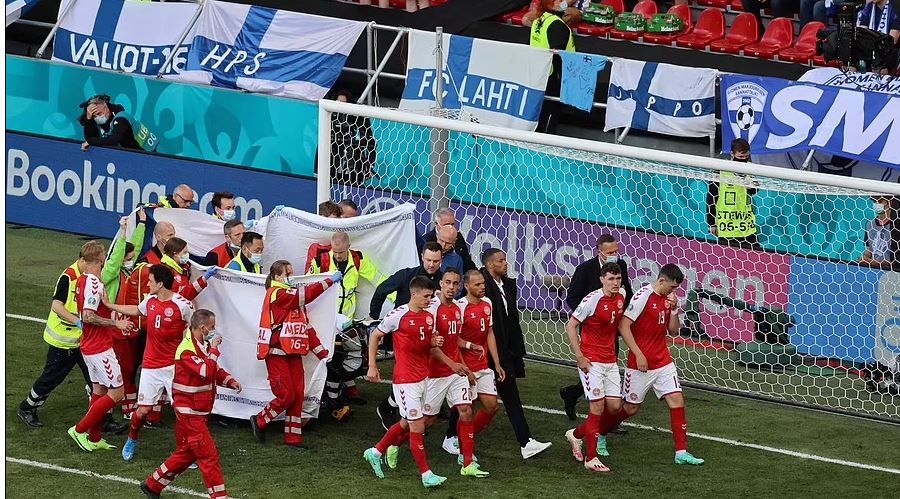 Euro 2020 game to restart with Christian Eriksen ‘awake’ in hospital

Denmark’s Eriksen conscious in hospital after collapsing at Euro 2020