Recently, it has been win after win for Eliud Kipchoge. He emerged the winner in the London Marathon and won the Laureus Exceptional Achievement award. His wife, Grace Sugut, tell us about his career, family and more

What does winning award after award mean for Eliud Kipchoge?

It meant a lot for him to be recognised by the Laureus Academy. He felt appreciated. Also, he was delighted to defend his title and win the London marathon for the fourth time. His focus, however, is the impact he makes to young people and how he can inspire a person everyday. He stays grounded by sticking to his plans and not straying off course.

What goes on in his mind while running a race?

For him, running a marathon is like taking a long journey. He emphasises on the need to keep his mind focused on the finish line and get there in a good time. He also always insists on prior planning and training before running any race.

When did his passion for running begin?

While still in primary school, he used to run a lot. He would outrun all his classmates during games time. I guess this is where it started because after his secondary education at Kaptel Secondary School, Nandi, in 1999, he decided to go professional.

He admired Patrick Sang, an Olympics and IAAF World Championship silver medallist, who was also his neighbour and requested him to train him. He desired to travel and board an airplane just the way he did. Sang agreed to train him and bought him his first training kit. They have been together for more than 16 years and he is not just his sports coach, but also a life coach.

Which is his memorable race?

The 2003 Paris IAAF World championship was his first big race, which he actually won. It marked the beginning of marathon for him. The 2017 Nike Breaking 2 Project was also special for him. Experts were of the opinion that the first person to run a marathon for sub two hours would be in 2075. The Breaking 2 Project brought together some of the best runners in the world to try and break the two-hour time barrier.

Eliud ran 42 kilometres for two hours and 25 seconds, falling agonisingly close to breaking the two-hour barrier. That’s why he always says that the world is 25 seconds away. At some point, researchers said that he was pushing his body beyond its limits, but that did not deter him. Eliud believes that running is about the heart and mind, not the legs. To him, it is all about believing.

Is that why he has announced he will go for the Breaking 2 challenge again?

Running the fastest ever marathon time of 2:00:25 was the proudest moment of his career. To get another chance to break the magical two-hour mark is exciting for him.

What do you think would be his wish for Kenya?

He hopes one day, Kenya will become a running nation. For him, a running nation translates to a healthy and wealthy nation. He believes a running culture would create a peaceful nation. People should embrace sports as a healthy activity and not just as a professional career. He often gives an example of a company he visited during one of his tours in Europe, which had a policy that required all members of staff, from the top manager to the tea girl, to run five kilometres every Thursday. The staff became more productive and the cases of people requesting for sick leave reduced significantly.

What does he do when he’s not running?

Where does his passion for conservation come from?

He loves training outdoors because it brings peace to his mind. He is actively involved in tree-planting activities in the community and encourages young people to conserve the environment. He is an ambassador of various conservation initiatives and often participates in the Lewa Marathon to help raise funds for conservation projects.

With his tough schedule, how does he balance family and career?

We have four children — one girl and three boys. When he is around, he spends time with them and when he is out training or running, we understand and cheer him on. He spends two or three days a week with them since they are in school most of the time.

Do you think any of them will become a professional athlete like him?

They are still young. But he has been a good role model to them. Do they see their dad as a celebrity? (Laughs) They just see him as a father.

What role do you play in his life?

I studied with Eliud all his life. From primary to high school and now we’ll be married for 13 years this year. As a wife, I’m his supporter. I take care of his business and the farm while he is away running or training.

Kipchoge and Wanja to feature in webinar series 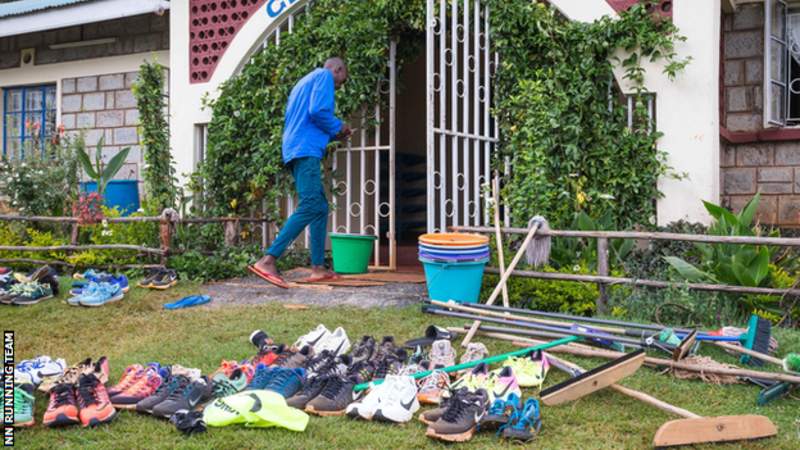 Drugs almost killed me, but I made it